Bundee Aki will make his Ireland debut against South Africa on Saturday.

The New Zealander has qualified through the residency rule and his inclusion in Joe Schmidt’s squad has been a hot topic within Irish rugby over recent weeks.

World Rugby have since extended the residency qualification period from three to five years.

"Sometimes where you are born is less relevant to where you have invested in the last period of time and I think Bundee has invested incredibly well in the west," said Schmidt.

"They have benfitted from his experience, his commitment and his durability. Bundee has played an immense amount of minutes for Connacht.

"He rocks up and he plays week-to-week.

"It’s an unfortunate distraction. I do feel sympathy for Bundee. He’s just doing what he loves doing and what he’s very good at but we hope it doesn't distract him

'It's never irrelevant' - Joe Schmidt addresses the Bundee Aki question as the New Zealander gets set to make his @Irishrugby bow #rterugby pic.twitter.com/OVh5I8M2jN

The 27-year-old Connacht player will line up at inside centre with former team-mate Robbie Henshaw at the Aviva (5.30pm).

Ulster’s Jacob Stockdale will make his first home start on the left wing.

Schmidt has deemed Munster’s Keith Earls not fit for action after the in-form wing picked up a knock at training, which has threatened his participation against Fiji and Argentina as well.

In comes provincial team-mate Andrew Conway, who will win his fourth cap.

"Keith Earls is a doubt for the series at this stage," said Schmidt.

"It is a fantastic opportunity for Andrew Conway and Darren Sweetnam." 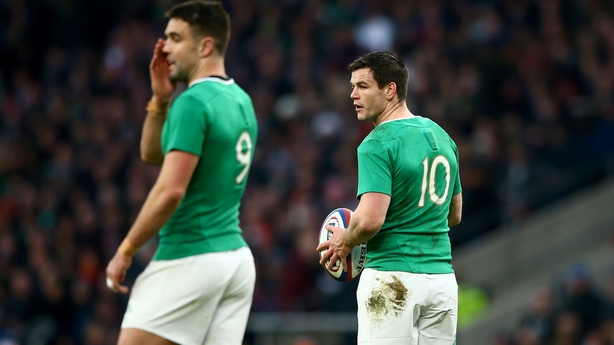 As expected Conor Murray and Johnny Sexton form the half-back pairing, while Rob Kearney gets the nod at full-back.

In the front row, Cian Healy steps in for Jack McGrath, who also picked up a "knock on the hip" from this week’s practice at Carton House.

"He’ll be back and [will] give us a lot of value. He’s just back taking contact," said the coach.

"It's a team picked on form" - Joe Schmidt on his selection to face South Africa pic.twitter.com/n3N7YfD5Pq

Iain Henderson and Devin Toner are the second-row starters, while the Lions trio of Peter O’Mahony, Sean O’Brien and CJ Stander, lining up against his native country, form the back row.

Joey Carbery and Kieran Marmion provide back-up from the replacements bench, as does Darren Sweetnam, the Munster back set to earn his first cap also.