Leinster may have been without a host of top stars against Montpellier but Girvan Dempsey was impressed with how the young guns stepped up.

The star-studded list of absentees included Johnny Sexton, Sean O’Brien Jamie Heaslip, Garry Ringrose and Rob Kearney. They had to play more than half the game without captain Isa Nacewa, who suffered an ankle injury.

But that didn’t stop the stand-ins from recording a bonus-point win.

Up stepped Barry Daly, Adam Byrne, Ross Byrne and James Ryan among others.

"It was brilliant to see them step up to the mark across the board," Leinster backs coach Dempsey said.

"I thought James Ryan was phenomenal. The whole forward pack was excellent, they really stood up to a very, very big Montpellier pack and gave our backs some ball that we could play off.

"Likewise the backs, there was a few guys getting their first European start, like Barry Daly on the wing.

"I though he was excellent across the board, in defence and took his try really well."

Ahead of an away trip to Glasgow on Saturday (1pm), it bodes well for Leinster’s aspirations this season.

He added: "That gives us confidence, Everyone feels that we’re building, as a team, as a squad.

"Everyone feels that they are contributing, and it’s a great place to be, to have that competition for places with guys coming back from injury."

Glasgow opened their Pool 3 campaign with a 24-15 defeat at Exeter but have won six from six in the Pro14.

And despite Leinster’s performance, Dempsey knows there is room for improvement. 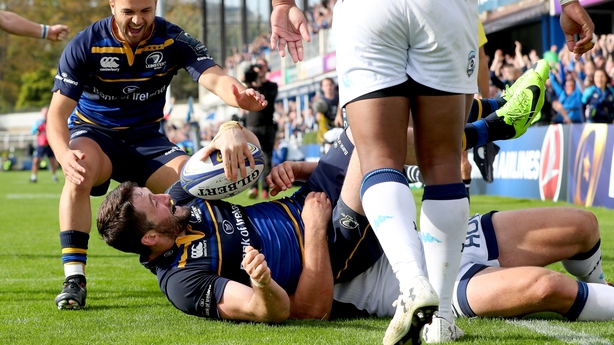 "Glasgow are going to be a big threat for us," he said.

"We can’t afford to give them the opportunities that we gave Montpellier because they’re clinical, particularly at home, they’ve scored in the region of 30-odd points every home game this season.

"They still have that Glasgow mentality [under new coach Dave Rennie], playing with pace and an offloading game, a quick tempo.

"They are very tough at the breakdown, they’re clinical off turnover ball and counter attacks.

"It’s a huge test. Glasgow are a quality side and they’re on a high.

"If you look at the game against Exeter, going into the last six or seven minutes it was 17-15 and Exeter scored late on to take it away from Glasgow.

"They hadn’t lost prior to that. They are very tough at home.

"We’ve got to make sure that you are very accurate in your set-piece, very accurate when you have the ball, don’t turn it over and don’t give it up cheaply."