England captain Sarah Hunter believes her team has what it takes to win the Women's Rugby World Cup.

Hunter said she was ecstatic to reach Saturday's show piece in Belfast after England's hard-fought 20-3 semi-final victory over France.

Minutes after the final whistle, the number eight had already turned her sights on the final opponents.

She expressed confidence England still had enough in the tank to go again against the mighty New Zealand, despite Tuesday's sapping encounter against the French in the rain at Belfast's Kingspan Stadium.

"It was certainly a hardfought battle to get the result we wanted."

"I am ecstatic to get to another World Cup final," she said.

"There is a bit of relief and I am a little bit tired - it was certainly a hardfought battle to get the result we wanted."

The Bristol forward added: "Right from the beginning, right from the start when this group came together, that was our ultimate goal - to go and win another trophy and we have put ourselves in the best position to go and do that.

"We knew coming to the World Cup that we had to take each game at a time and get there and build through the tournament and I would like to think that's what we have done.

"Each time we have needed to put in performance the players and the girls have stepped up to the mark and it's going to take another step up on Saturday, but we have the belief and we have the strength within the squad to go out and do that. 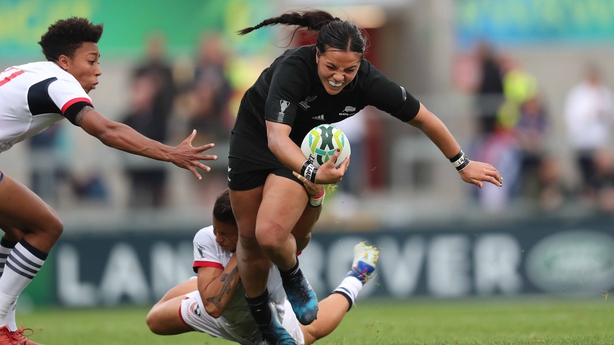 "We have still got something in the tank to come and that's what you need in a World Cup final and I think how the management have utilised the squad. There is 100 per cent belief that, whichever 15 take to the starting pitch, whichever players come up and finish the job, that anyone will do it.

"So there's certainly energy left in the tank to go one last push to hopefully win that trophy on Saturday."

England coach Simon Middleton said the clash against the French was "befitting of World Cup semi-final".

He hailed the resilience of his players and said he knew they would not panic in the face of periods of French pressure on their line.

"We have one more to do and they won't need pointing in any directions, they know exactly what it is going to take on Saturday."