Johnny Sexton has revealed Jordie Barrett caught his eye 12 months ago when playing against Ireland at the Junior World Cup, and said he knew immediately the full-back was destined for stardom.

Barrett - brother of Beauden - scored a try against the Irish but was on the wrong side of a famous 33-24 win for Nigel Carolan's men.

His star has soared ever since, with Steve Hansen giving him his first Test start for the mouthwatering Eden Park series decider this Saturday.

It's an enormous show of faith in Barrett, but Sexton believes the 20-year-old is absolutely ready to step into the furnace, and is braced for his full box of tricks.

"I watched him play against Ireland in the U20s World Cup last year and straight away he struck me as somebody who was going to make it on the international stage," said the Leinster outhalf.

"I think he’s been one of the form players in New Zealand this year so he definitely deserves his selection. He’s a threat.

"He’ll bring a different dimension. He’s got a big boot. We’ve got to be ready for him."

Sexton paired up with Owen Farrell as a 1-012 combination for last week's 24-21 win in Wellington.

Debate had raged in the series build-up about a straight shootout between the two for the outhalf position, but Warren Gatland's call to play both paid off. Sexton has relished the partnership. 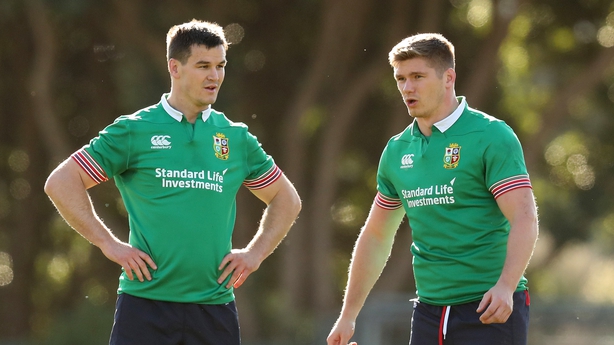 "It’s great to have someone outside you, feeding you really good information at times," he said of the Englishman.

"We get on really well off the pitch which helps. Hopefully we can improve again for Saturday because we need to.

"With both of us being in there, the coach obviously felt it added a different dimension to the team. At times we saw that last weekend and hopefully we’ll see a bit more of it come Saturday.

"The support we’ve had out here has been incredible. It shows how important Lions tours are and how much they mean to everyone still, in the professional game.

"We know how much pressure is on New Zealand as well. We’ve got to cherish the atmosphere; it doesn’t come around too often. We’ve got to try and enjoy it. You struggle to enjoy it at times, with the nerves and that, but it is once-in-a-lifetime stuff."