Barrett, the 20-year-old brother of All Blacks fly-half Beauden Barrett, wins a second cap at full-back after going on as a replacement during the pre-series appointment with Samoa last month.

Elsewhere, Ngani Laumape lines up at centre instead of a suspended Sonny Bill Williams, while juggernaut wing Julian Savea [below] is recalled for Rieko Ioane and Israel Dagg switches from full-back to right-wing, with Waisake Naholo dropping out.

Naholo suffered a head knock during the second Test defeat in Wellington last weekend, but it is understood his omission from the match-day 23 is not related to that.

Ioane, two-try star of the first Test win, also misses out, with Malakai Fekitoa, who was called into the All Blacks squad last weekend, providing back division cover on the bench alongside TJ Perenara and Aaron Cruden. 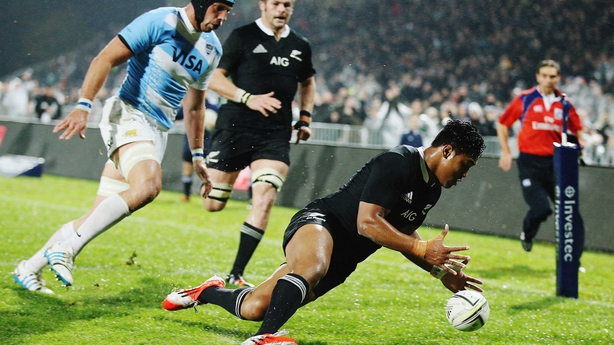 Both Barrett and Laumape have been in blistering Super Rugby form for the Hurricanes this year, but they are sure to come under pressure on Saturday, given their international inexperience, as the Lions target a first Test series triumph against New Zealand since 1971.

Savea, meanwhile, was not involved in the first two Tests, but he is a proven performer at the highest level, scoring 46 tries during his 53-cap career.

New Zealand head coach Steve Hansen said: "Firstly, on behalf of the All Blacks and all of New Zealand, I would like to congratulate Reado on reaching the milestone of 100 Test matches.

"It is a special achievement to play just one Test, so to play 100 is a remarkable effort.

"His playing ability speaks for itself and inspires others, and he now joins a unique group of special All Blacks.

"This final match in the series is going to be a cracker.

"We would also like to congratulate Jordie on making his first Test start in what will be a very memorable occasion for him.

"This final match in the series is going to be a cracker. It's the series we expected it to be, as the Lions have quality players.

"It now comes down to this Saturday - the winner takes all - and that will create its own unique pressures, and it's going to be interesting to see how both sides cope with it.

"We've had a good week of preparation and are very excited by the opportunity that is ahead of us, and I am sure the Lions are as well.

"We know it will be a physical and intense match, but just as importantly, it will be a game where both teams will have moments of momentum, and the ability of everyone to adapt and adjust throughout the 80 minutes will be crucial."