Warren Gatland has called for an end to any "trash talking" heading into the British and Irish Lions' first Test against New Zealand.

Steve Hansen has criticised the Lions' playing style, their punishing schedule and even attempted to predict the tourists' Test line-ups, while Gatland bit back by insisting the All Blacks boss was "worried".

Lions head coach Gatland joked "that's a nice place to be in" when responding to suggestions he may have got up Hansen's nose, ahead of Saturday's Auckland opener.

But he also vowed not to let his players be goaded into deserting the suffocating tactics that have underpinned their potent wins over the Crusaders, Maori All Blacks and Chiefs.

"It's not about me at all, this is about the Lions and this group of players," said Gatland. "It's not about trying to get one-up on anyone, or me coming home.

"I'm not worried about Steve [Hansen], he can say whatever he likes. If I'm getting up his nose that's a nice position to be in!

"It's not about me at all, this is about the Lions and this group of players."

"We've got ourselves to prepare, we know it's going to be a tough encounter. Let's let the rugby do the talking because there's been enough trash talking already. So let's get excited about what could be a fantastic series. A couple of sideline things have taken the focus away from that.

"The welcome, the hospitality we have received has been awesome.

"I'm getting a different message from the one we've been receiving as a squad of players from sometimes what's being reported in the media."

Peter O'Mahony will captain the Lions in Saturday's Test series opener, with tour skipper Sam Warburton taking a seat on the bench.

Warburton becomes the Lions' first tour skipper since 1930 not to lead the tourists in a Test opener. 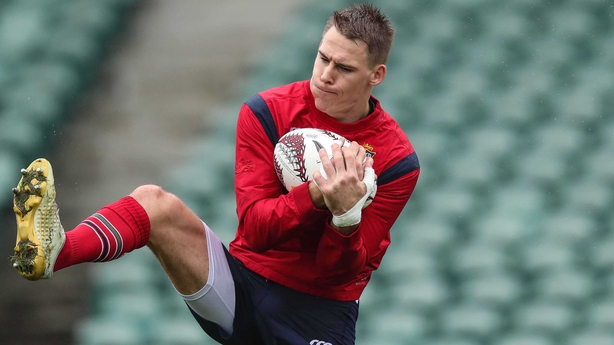 Liam Williams [above] has been preferred to Leigh Halfpenny at full-back, with Elliot Daly starting at left wing and George North omitted from the match 23.

Gatland insisted that the Lions have delivered the selection priorities they had promised.

"I'd like to think we've been consistent in the messages we've been delivering," said Gatland.

"We said that we'd pick the team on form, there are some differences from predictions at the start of the tour, but that's what we've done."

The Lions announced their Test intentions with their bullish 12-3 win over the Crusaders in Christchurch, before dispatching the Maori 32-10 in Rotorua.

Daly and Williams played their way into the Test side in Tuesday's 34-6 win over the Chiefs in Hamilton, and Gatland pledged the Lions will stick to their long-held plans over styles of play.

"To play against the All Blacks you've got to have a strong set-piece, you need a platform to be able to work off to start with."

"We squeezed the life out of those two teams and we won't stop being aggressive defensively," said Gatland of the Lions' wins over the Crusaders and the Maori.

"To play against the All Blacks you've got to have a strong set-piece, you need a platform to be able to work off to start with.

"We've created opportunities, early on the tour we weren't finishing off the line breaks, but on Tuesday against the Chiefs we started to do that.

"We struggled at the start of the tour, but we've outscored opponents nine tries to three in the last four games.

"I can't fault the players if we're getting some success by dominating up front.

"We're not going to be talked into playing Barbarian-type rugby when we've got certain weapons we can use to our advantage. That's being smart about how you play.