Ireland and Lions centre Robbie Henshaw has admitted his personal frustration after the Lions suffered their second defeat of the 2017 tour against the Highlanders in Dunedin this morning.

Henshaw played at inside centre in the defeats against the Blues and the Highlanders but was omitted from the starting line-up for the 12-3 victory over the highly-rated Crusaders on Saturday.

"It was extremely frustrating," Henshaw told reporters after the 23-22 loss.

"To wear the red shirt is a privilege. And we want to win and do ourselves and the jersey proud. To have played two games now, personally, and to have lost two games is pretty frustrating for me.

"I'm sure the lads inside there are in a similar boat."

A 53rd-minute try by Welsh flanker Sam Warburton put the Lions 22-13 ahead but a converted try on the hour mark and a 74th-minute penalty allowed the Highlanders to squeeze into the lead again.

With two minutes remaining, Elliot Daly's attempt at a 57m penalty dropped one metre short and the hosts clung onto win.

Though many analysts acknowledged an improved Lions performance, especially in attack where they ran in three tries, Henshaw said the team needed to learn how to kill off games.

"We were pretty frustrated at the moment. It's a disappointing result. Having gotten into that lead we looked to be in control. It's a big learning for us to not let teams back in," he said.

"It's a massive learning for us. If you let teams like the Maoris or the All Blacks in a week's time, they'll get back there and demolish you."

"It's a pretty tough pill to swallow, to be honest. We can't let teams back in. It's a simple as. A few basic errors gifted them opportunities. And they took them," Henshaw said. 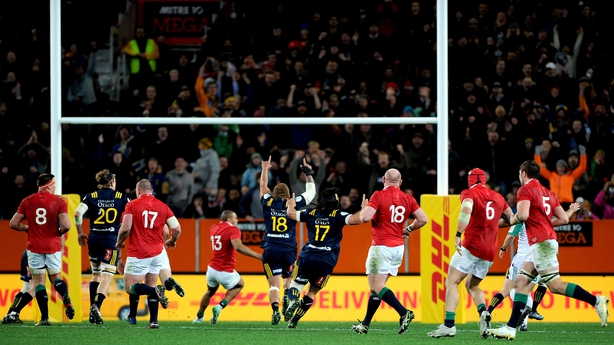 The Leinster back said that the challenge for the Lions players was to adjust to that.

"The speed they play at, they look to a play high-tempo game. They play a faster rugby than we're used to.

"That's the challenge of getting used to that. Being 100% switched on all the time.

Ireland's Jared Payne, chosen at full-back, was at the heart of one of the game's pivotal moments.

With the Lions leading by nine points in the 55th minute, he dropped a restart, conceding a penalty. From the subsequent attack, the Super Rugby side eked out the crucial try which brought them back in the game.

Henshaw said he expected that Payne would bounce back from the error.

"I think Jared grew into the game," he added.

"He was obviously unlucky with the restart. He's pretty frustrated at the moment. He's a class player and he'll get over that.

"He's been around so long, he knows these teams inside out. I don't think it's too big of a worry, he's an experienced player."