One big scrummage toppled the British and Irish Lions for the second time in New Zealand, as the Highlanders prevailed 23-22 in Dunedin.

Jonathan Joseph, Tommy Seymour and captain Sam Warburton all ran in tries for the often-threatening Lions, but the tourists were undone late on at the coal-face.

The Highlanders blasted the Lions off the ball, and Marty Banks slotted the 74th-minute penalty that wrestled the one-point lead - and eventually the result.

The Crusaders made the scrum a big talking point after the Lions defeated them 12-3 on Saturday, insisting the tourists struggled at the set-piece.

And here referee Angus Gardner certainly felt the hosts had the upper hand in the decisive skirmish.

Replacement Owen Farrell missed a routine shot at goal and Elliot Daly failed with a long-range effort, as the Highlanders joined the Blues in scalping the Lions.

Waisake Naholo and Liam Coltman claimed the tries for a Highlanders side missing nine regular starters, including All Blacks Aaron and Ben Smith.

The Lions will be left to lick the wounds of a second defeat in four matches on this tour, with Courtney Lawes a new injury doubt having suffered a nasty-looking head injury.

Both sides seized on the firm, dry track afforded by the roof in a pulsating first half.

Lima Sopoaga's penalty put the hosts ahead 3-0, before Rhys Webb knocked on stretching for a try.

The Highlanders punted their next penalty to the corner, only for Warburton and Rory Best to double up for a vital turnover. 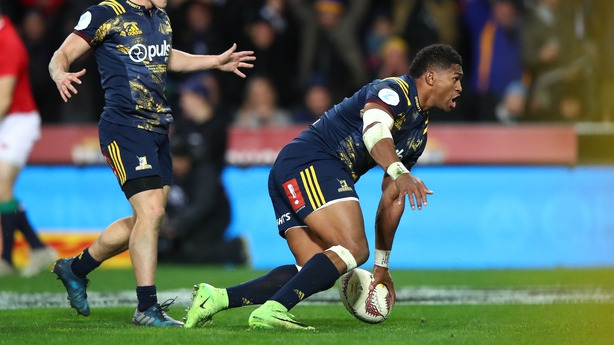 But then the home side raced in a brutal score, Malakai Fekitoa skinning Joseph before Naholo outfoxed Robbie Henshaw, bumping off Lawes en route to the line.

And then the Lions struck themselves. When a penalty gifted them great field position to strike from a lineout, the visitors seized the chance.

Biggar's neat delayed pass created the gap, and Joseph held his nerve to keep the ball and race over the whitewash.

Biggar's fine touchline conversion tied the scores at 10-10, and so they stayed until the break.

Seymour opened the second half with a perfectly timed high-ball take that allowed him to race home for the Lions' second try.

Kyle Sinckler's last act of an otherwise-fine night was to hand the hosts a loose penalty, rushing up for a late tackle. Sopoaga posted the penalty, with the Lions leading 15-13.

The Highlanders botched an attempted clearance to hand the Lions a five-metre attacking scrum - and the tourists struck.

Joseph and Jared Payne almost wriggled free, before Iain Henderson punched through the middle and Warburton stretched home for a good try. Biggar's conversion put the visitors 22-13 ahead. 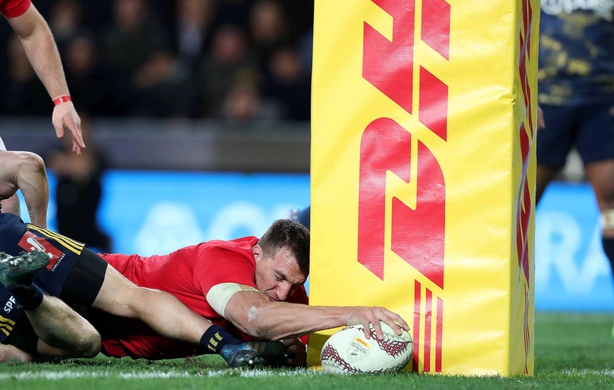 The Highlanders came fizzing straight back after Payne dropped the restart, but Henderson blasted through a ruck to force a gritty turnover.

No sooner was the danger clear, than the Lions heaped pressure straight back on themselves.

Referee Gardner told Warburton that Jones was "miles offside" at a lineout - and the Highlanders capitalised in full.

Liam Coltman capped the driven lineout with a try, that Banks converted - to leave the Lions leading just 22-20.

Owen Farrell replaced Biggar and his first act was to drag a penalty wide, and then the Highlanders forced lock Jones into a choke tackle turnover.

That swung the momentum right back to the hosts, who then bulldozed the Lions' scrum - for Banks to slot a penalty to wrestle back the lead, 23-22.

The Lions wanted the penalty reversed amid tetchy jostling after the scrum, but TMO Marius Jonker told referee Gardner: "They were just all saying hello and goodnight to one another."

Again the Highlanders attacked, but CJ Stander pulled off a stunning turnover.

Daly tried a long-range penalty as time ticked down, but not even the Wasps flyer's howitzer boot could deliver from almost 60 metres.