Shorn of 11 frontline players away on duty with the British and Irish Lions in New Zealand, Joe Schmidt has named the uncapped Jacob Stockdale on the wing, with a further four players poised to win their first caps from the bench against the United States at Red Bull Arena, New Jersey.

Connacht hooker Dave Heffernan, Leinster pair Andrew Porter and James Ryan, and Munster centre Rory Scannell could all feature in the first of their three-Test summer tour, while John Cooney, Kieran Treadwell and Rory O’Loughlin will hope to feature in the Tests against Japan in Shizuoka and Tokyo.

Leinster flanker Ruddock will become the 105th player to captain Ireland and told RTÉ Sport that the new faces are being made to feel right at home in the new environment.

"My focus has been on delivering in terms of what is expected, how you train, how you recover and setting an example," he said.

"If there’s ever a time where any of the more experienced guys like myself, or guys who have been in the environment a little bit more can offer any bit of advice or bring people along with you, that’s been done.

"And there are lots of leaders within the group."

Most attention will invariably fall on winger Stockdale. The 21-year-old has been in superb provincial form with Ulster, running in nine tries in the PRO12, and Ruddock says all eight uncapped players have been impressing Stateside.

"I’m looking forward to seeing them [debutants] out there."

"Hopefully it will be a special day for them [debutants]. The way they have trained, they look every bit ready. I’m looking forward to seeing them out there."

The visitors are strong favourites for the match which kicks off at 5pm local time (10pm Irish time) and the stand-in skipper says the group are getting used to the warm conditions.

"It’s really warm today, but we’ll have to see what it’s like tomorrow. We’ve had a bit of a mixed bag with the weather the past few days.

"The intensity had to be high to get used to the conditions and make sure we know what to expect."

Follow the USA v Ireland on our live tracker on RTÉ.ie and News Now App from 9:30pm. 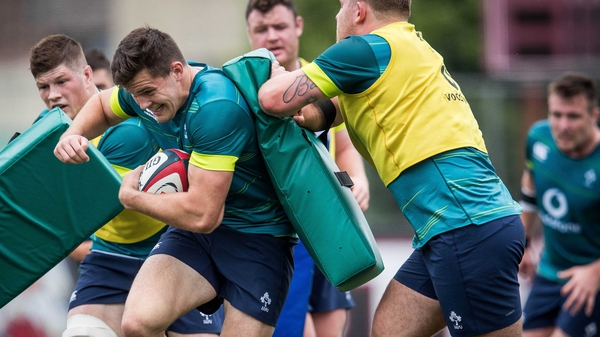