Ireland have been drawn alongside Scotland and hosts Japan in Pool A of the 2019 Rugby World Cup in Japan.

As one of the top seeds, Joe Schmidt’s men, ranked fourth in the world, avoided New Zealand, Australia and England.

Ireland will also face the Europe 1 qualifier and a play-off winner.

"Getting to avoid South Africa, France and Wales, that's a big thing for us," said number 8 Jamie Heaslip.

"We're happy with it, there's some tougher groups, but when you've seen what Japan have done in the last 18 months and Scotland we've struggled with as well.

"It's an exciting group for us, and I'd say Joe (Schmidt) is already starting his planning."

The Europe 1 place will be taken by the best performers across the 2017 and 2018 Europe Rugby Championship, excluding Georgia, which at the moment would be Romania.

The play-off winner will be the third-placed Oceania team (Fiji, Samoa or Tonga) or the second-highest ranked European team, which at the moment would be Spain.

"Any pool that we were going to get was a big challenge," said Japan coach Jamie Joseph, whose side meet Ireland in two Tests this summer.

England, meanwhile, have been handed a fearsome draw for the second successive tournament.

Eddie Jones' men will be in the same group as France and Argentina.

At the 2015 World Cup, England were grouped with Australia and Wales and failed to reach the knockout phase. 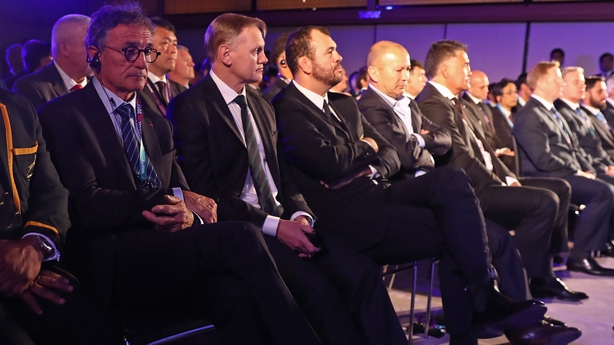 "It's all very exciting, we've got two tests against Argentina in June so we can practise playing them a bit then," said Jones.

"France have really improved over the last two years and are a really dangerous team.

"It's going to be really exciting" - Japan Coach Jamie Joseph spoke after his side were drawn with Ireland in pool A of the #RWC2019 pic.twitter.com/e8jw4DIJOr

Wales have drawn Australia for the second successive World Cup - Georgia are also in their pool - while there is a shuddering showdown ahead between holders New Zealand and twice world champions South Africa in Pool B, where Conor O'Shea's Italy will be outsiders to progress.

Should Ireland progress as pool winners they would meet the runners-up in Pool B, likely to be either South Africa or New Zealand.