Leinster have made 11 changes to their side for the Guinness Pro12 clash with Connacht at the Sportsground on Saturday (7.35pm).

Johnny Sexton and Joey Carbery have been rested, as have centre pairing Robbie Henshaw and Garry Ringrose.

Zane Kirchner and Rory O'Loughlin are the only two backs retained from last weekend's win over the Ospreys. 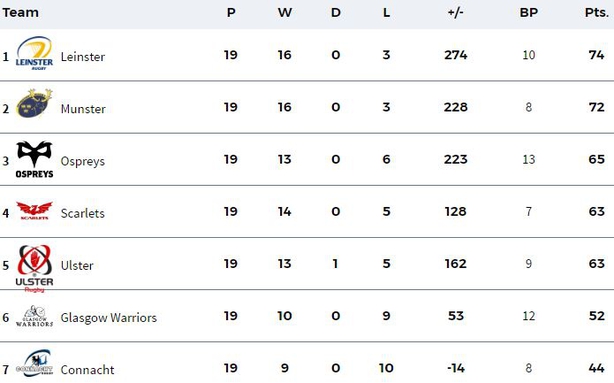 Kirchner shifts from outside centre to full-back and O'Loughlin will start in the number 13 shirt, partnered by Noel Reid in midfield. Dave Kearney and Adam Byrne complete the back three.

Rhys Ruddock moves to number 8 and will captain the side, with Dominic Ryan coming in at blindside flanker and Josh van der Flier once again starting at openside.

An all-new tight five has been selected for this weekend's test in Galway.

Jack McGrath and Tadhg Furlong have been given the weekend off with Cian Healy, James Tracy and Mike Ross starting in the front row. Ross Molony and Hayden Triggs make up the second row pairing,

A win for Leinster in Galway could secure a home semi-final in the Final Series if Ospreys don't win their match against Cardiff Blues, and Scarlets fail to take maximum points from their game against Dragons.

Connacht captain John Muldoon will play his 300th game for the province when he lines out tomorrow night.

The 34-year-old, who has started 23 games already this season, leads the team featuring four personnel changes from last weekend.

Jack Carty is handed the reins at out-half for the visit of the table toppers, while Craig Ronaldson is recalled to start in the centre with Bundee Aki.

Dave Heffernan and Ireland international Finlay Bealham are named in the front row in an otherwise unchanged forward pack.

Commenting on the upcoming game, head coach Pat Lam said: "It's great to be back at the Sportsground in front of our home support after a number of weeks on the road.

"Leinster are flying high at the top of the table as well as in Europe and we know we are coming up against a tough side stacked with quality players.

"But that just adds to the excitement for us as a team. We are really looking forward to this game and the chance to put in a huge performance for ourselves, for our supporters and for John Muldoon on a special day for him."