Connacht captain John Muldoon is proud to reach 300 appearances for the province, although he didn't think he would do so at the start of the season.

The 34-year-old holds the record for Connacht appearances and will make it 300 when they entertain Leinster in the Pro12 at the Sportsground on Saturday (7.35pm).

However, before the season began, the Galway man didn’t think he would play the 25 games necessary to reach that mark.

"It’s something that I’ve targeted for quite a while. I said it’d be nice to get 300 games but I’ve no doubt that someone else will come along and beat that."

Regarding the match itself, Muldoon is playing down his landmark and concentrating on the derby battle ahead.

He continued: "It’s another game, it’s a derby, it’s Leinster coming to town. A lot of the younger fellas are excited and can’t wait to get into it. 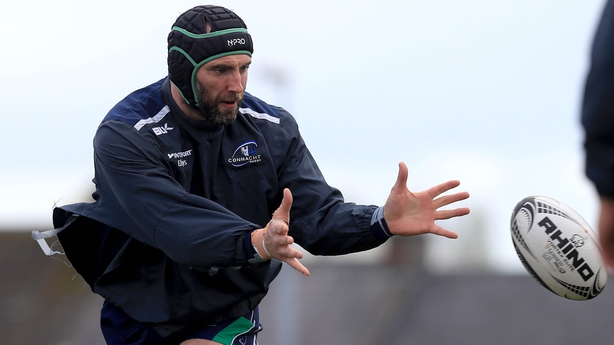 "I’ve played in a good few of them before and I’ll treat it as the same as any other derby game and any other game at home. The fact that it’s 300 doesn’t really make much difference to me.

When asked as to why he didn’t think he’d get to the 25-game mark for the season and reach the milestone, Muldoon simply laughed and said "age".

Connacht are currently seventh in the Pro12 and should reach the Champions Cup play-offs if they finish eighth or higher - higher is where Muldoon wants to go as the season draws to a close.

"We obviously want to finish as high up as we can. We know that with a couple of results we could have been higher up, we’re disappointed with the outcome of a couple of the games," he said.

"But we’ve still a lot to play for. We want to nail down seventh and Cardiff are hot on our heels. We’ve obviously given them an opportunity by losing a couple of games recently.

"So we just want to play and keep winning and keep pushing on up the table."