Leinster have confirmed that Rob Kearney will be out for a "number of weeks" after undergoing surgery on a bicep injury, but are hopeful that Adam Byrne will return to training next week.

Byrne was replaced during the first-half of the 32-17 quarter-final win over Wasps at the Aviva Stadium, but is expected to be available for the clash with Clermont in Lyon later this month.

The winger has a “low-grade” hamstring strain and is out of the Pro12 visit to the Ospreys this weekend, but should return to training next week ahead of the inter-provincial clash with Connacht the following week.

The exact return of 31-year-old Kearney is a little more unclear. The two-time Lion damaged his bicep in the Six Nations and underwent surgery last week to address the problem.

He also recently had a minor procedure on his knee.

Backs coach Girvan Dempsey confirmed that Johnny Sexton is not a fitness concern after receiving treatment on his shoulder against Wasps, while Jack Conan and Zane Kirchner came through the game after recent lay-offs with calf and hamstring respectively.

Seán Cronin will be available for selection against the Ospreys after a try-scoring substitute appearance for Leinster ‘A’ last Friday and Dempsey says the player is coming back to an ultra-competitive environment.

"He’s going to be back in the shake-up and putting pressure on James Tracey. He’s available for selection this week and in good form," Dempsey said.

Dave Kearney (toe) and Dominic Ryan (knee) are expected to step up their training load this week ahead of further assessment. 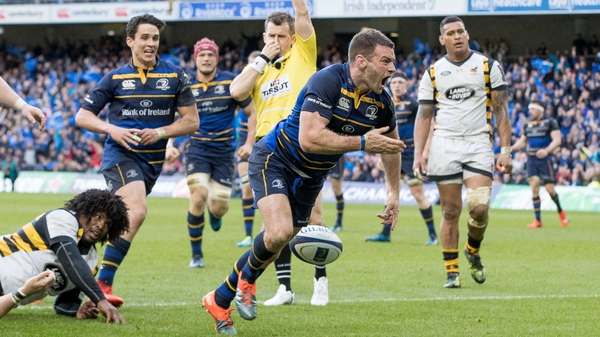