Leinster stormed into the last four of the Champions Cup with a four-try destruction of Wasps at the Aviva Stadium.

The hosts led 22-3 at the break thanks to tries from Isa Nacewa, Robbie Henshaw and Jack Conan, restricting the Premiership table-toppers to a single Jimmy Gopperth penalty.

They had a huge let-off when Willie Le Roux let the ball slip from his grasp as he dived over for what should have been a try on 23 minutes, but Wasps did fight back on the turnaround, with Christian Wade and then Gopperth scoring fine individual tries.

Leinster took the game by the scruff of the neck thereafter, and Fergus McFadden's effort six minutes from time closed out an impressive victory.

Apart from Wasps' purple patch in the third quarter, they were second best on the day as the Aviva claimed the scalp of another highly-rated English team, just a fortnight on from the spoiling of England's expected Grand Slam party. 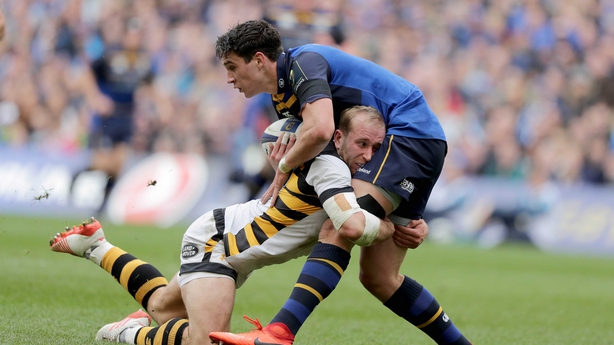 Leinster were the early aggressors in this meeting of the current Pro12 and Premiership leaders, and six minutes had elapsed when a 33-metre penalty from Jonathan Sexton punished Joe Launchbury's side-entry.

After Wasps blew their first two lineout opportunities, with Nathan Hughes being turned over and the heavily-targeted Danny Cipriani passing straight into touch, they survived a Garry Ringrose-led break up the right wing.

However, strong runs from Adam Byrne and Dan Leavy got Leinster straight back into scoring range and Carbery's skip pass released captain Nacewa for an unconverted 14th-minute try in the left corner.

A barnstorming charge from the industrious Sean O'Brien had Wasps briefly under pressure, before Dan Robson's clever kick sent Carbery rushing back to cover.

Kurtley Beale provided some much-need inspiration for Wasps when he returned a Carbery kick in superb fashion, breaking over halfway and offloading brilliantly for the supporting Willie le Roux but the South African blundered when losing control of the ball as he dived over the try-line. 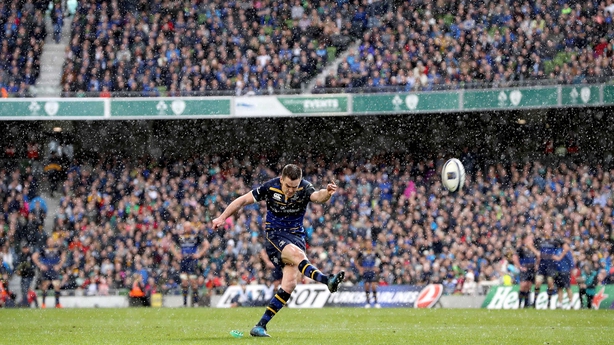 After that 24th-minute let-off, Leinster errors saw them cough up a penalty from an attempted maul and then prop Tadhg Furlong, who was a busy figure in open play, was pinged for a tackle off the ball which Gopperth turned into three points.

However, the counter-attacking Carbery soon knifed through along with McFadden following a loose Wasps kick, and their lovely interplay on the right released number 8 Conan for a cracking 33rd-minute score.

Sexton converted and also added the extras to Henshaw's opportunist try which saw Devin Toner rip the ball free from a Wasps maul and Leavy, O'Brien and Sexton combined to send the centre surging over.

The rain made conditions more difficult on the resumption, with Wasps' execution continuing to let them down. Sexton split the posts with another penalty in the 48th minute.

Five minutes later, Wade's blistering pace earned Wasps their first try, the winger dotting down his own grubber kick to the right of the posts after Carbery, returning a kick, had been turned over.

Gopperth converted to reduce the arrears to 15 points and play became increasingly fractured, Leinster pressing twice in the 22 before Elliot Daly's long kick downfield had Henshaw scampering back to save a potential try.

That score came from Gopperth who produced a classy finish against his former side, evading two tacklers from the edge of the 22 and converting for good measure. Suddenly, Leinster were only eight points ahead.

A sidestepping run from Ringrose almost produced the ideal response from the Irish province, although Wasps forced a subsequent knock-on and then Wade beat Nacewa to Sexton's cross-field kick.

In the end, Leinster's stranglehold of territory and a heavy defensive workload saw Wasps give way seven minutes from time. Toner barged through to a few metres out and produced quick ruck ball for McFadden to slither over under pressure from two defenders. Sexton's conversion was the final nail in the coffin.