Ireland have denied England back-to-back Grand Slams with a 13-9 victory in their Six Nations clash at the Aviva Stadium in Dublin.

A try by Iain Henderson and eight points from Johnny Sexton were enough to give Ireland victory and deny England a 19th successive Test victory that would have eclipsed the record set by New Zealand last year.

A frenetic but one-sided first half gave way to a more tense rain-swept second period and while the scoreline painted the picture of a close encounter, Ireland were clear masters on a day when history beckoned for Eddie Jones' men.

The hosts enjoyed the lion’s share of possession and territory in the opening half, with Henderson's try and a Sexton penalty giving them a 10-3 lead at the interval.

Possession read 75% in Ireland's favour and English visits to the home 22 were rare and brief, and they were fortunate to trail only to Henderson's converted try.

It was a repeat of 2011 when England were denied at the same stage and the Dublin crowd was every bit as boisterous this time, especially during a final ten minutes controlled by the green shirts.

Sexton was clearly targeted in a match that will help shape British and Irish Lions selection with the tourists' head coach Warren Gatland watching from the stands, but the Leinster fly-half could at least take heart from knowing he had steered Ireland to a famous win.

Kick off was delayed by five minutes due to the 100-minute marathon staged between France and Wales in Paris, possibly causing the series of errors afflicting both teams once the Aviva Stadium showdown began.

It made for an pulsating start as dropped passes, charged down kicks and turnovers turned the opening exchanges into a lottery from which Ireland emerged in credit when Sexton booted a penalty.

Mike Brown prevented Keith Earls from scoring in the right corner following a spell of Irish pressure, but the next attack was England's and while they could make little meaningful headway Farrell was able to slot three points.

Maro Itoje escaped with a warning from referee Jerome Garces after clattering high and late into Sexton, who then sent two kickable penalties into touch rather than going for goal, and that endeavour was rewarded when Henderson was at the end of a line-out drive.

The ferocious pace continued as Elliot Daly almost escaped the Irish cover after gathering Farrell's clever chip, but England were back on the defensive almost immediately.

England were reeling with George Ford the next to be touched by panic, the fly-half sending a kick straight into touch to invite another assault from the home team, who were playing for the prize of Six Nations runners-up.

Ireland were dominating in every department, but their 10-3 lead was a sub-par return given the amount of possession they had generated.

The malaise continued into the second-half and even Billy Vunipola was afflicted when the big number eight - who was joined on the field by brother Mako after the interval - dropped the ball as he broke from the back of a scrum.

Half an hour remained when Farrell landed a long-range penalty and now there were tentative signs of an English revival, their pack finally starting to make an impression on the opposition.

But there was no real momentum behind the fightback and a mighty roar greeted Sexton's successful penalty on the wrong side of the 10 metre line.

England's bench had been all but emptied and the tension mounted as Farrell landed a third penalty, but Ireland closed out the remaining minutes with calm efficiency to deny Jones' men the ultimate prize in European rugby. 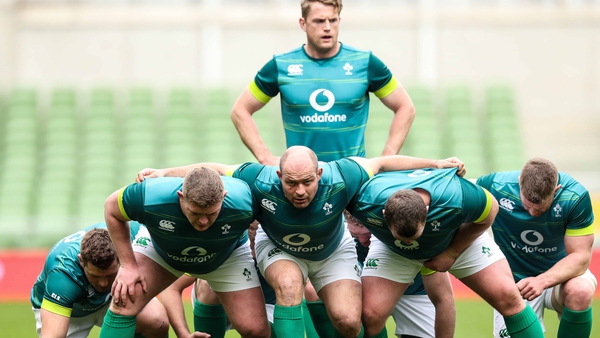