Leinster will become the first team to qualify for the knockout stages of this season's Champions Cup if they defeat Montpellier tomorrow, and Isa Nacewa admits the team has come a long way in 12 months.

The three-time European champions will claim Pool 4 with a game to spare if they can see off the challenge of Jake White’s side at the RDS tomorrow night (KO 7.45pm), with head coach Leo Cullen making five changes to his starting XV.

Seán O’Brien is a notable absentee with a calf injury, but team captain Nacewa returns at full-back and he appreciates that the feel-good factor is in stark contrast to last year’s campaign.

Leinster suffered five defeats, including a record-breaking 41-point defeat to Wasps, on their way to finishing bottom of the pool.

By the time the January fixtures came around, the province were already out of the reckoning and the 34-year-old is delighted they have got back to winning ways.

“It’s a big difference in 12 months. It was a pretty gut-wrenching feeling not to be even playing for a spot in Europe,” he told RTÉ Sport.

“The club is on a high, all the players are on a high. There’s a good buzz around.”

The Top 14 side sit three points behind their hosts in the table and will be buoyed by their 22-16 victory in round two.

Montpellier powered into a 14-3 half-time lead, with two tries from Nemani Nadolo enough to seal victory. Nacewa’s last minute try however – he scored all 16 of Leinster’s points on the day – ensured a crucial bonus point.

He insists that lessons have been learned from the loss at the Altrad Stadium.

“You can’t give a team like Montpellier a lead like we did over there. We didn’t play too much either.

“They are a big team and we let them into the game through ill-discipline. You take all those learnings and try to improve week-on-week.

“When the games come back around, hopefully we are that little bit smarter and wiser how we approach the game.”

Now in his second stint with the province, Nacewa has proven to be one of the most astute signings of the professional era and Friday will mark his 163rd appearance in blue, in stark contrast to those in close proximity in the backline.

Garry Ringrose and Robbie Henshaw have 40 appearances between them in midfield, while wingers Adam Byrne and Rory O’Loughlin will both be making just their 13th appearance for Leinster.

Nacewa singled out the two wingers in particular for special praise as they held on to their jerseys for the Champions Cup encounter.

“The way they have taken their opportunities, I think they have scored 14 tries in the last seven weeks between them, it’s good competition,” he said.

“There’s pressure to keep the jersey on your back and work that little bit harder every week.The two young guns have been firing on all cylinders and they deserve to be there.”

Temperatures are expected to drop close to zero tomorrow night in Dublin, but the full-back is more wary of other elements rather than the bitter coldness.

“Fingers crossed the rain stays away. From a backs’ point of view, if the temperature drops, it doesn’t matter as long as the pitch is dry. 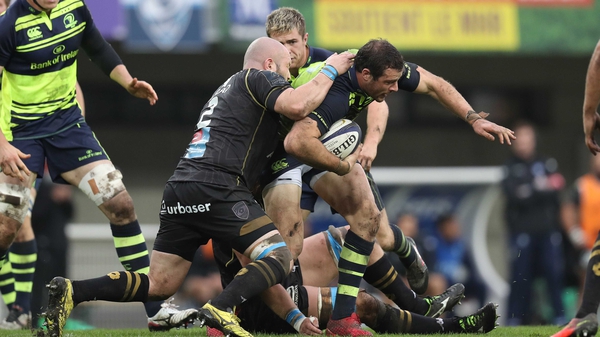