Ultan Dillane could be fit for the start of the Six Nations campaign after Connacht confirmed he does not require surgery on his ankle, while head coach Pat Lam has added fresh faces to his depleted squad.

The Pro12 champions face minnows Zebre this Saturday (KO 1.30pm) in the Champions Cup, in a fiercely contested Pool Two.

Dillane was a doubt for the upcoming Six Nations after picking up the injury in the loss to Ulster before Christmas, but Connacht say he is expected to return in between three to four weeks.

Ireland open their campaign away to Scotland on 4 February.

Meanwhile, the province have confirmed that Munster out-half Steve Crosbie and centre Tom Farrell have joined for rest of season, while prop Peter McCabe has moved to the injury-ravaged outfit on loan.

Lam was without 20 players prior to the defeat to Ospreys last weekend, with Jack Carty and Jake Heenan picking up injuries at the Liberty Stadium.

Out-half Carty picked up a low grade medial knee ligament to add to the catalogue of injures in the position, though Crosbie, who can also play in midfield, is cup-tied for this weekend, though Craig Ronaldson could be fit to return from action.

McCabe has made a number of appearances for Munster ‘A’ and made his senior debut against the Ospreys in the Pro12 this season. He also started against the Maori All Blacks at Thomond Park.

Elsewhere, centre Peter Robb is observing the return-to-play protocols after suffering concussion against the Ospreys, while Nepia Fox-Matamua remains unavailable with a rib cartilage injury.

John Muldoon has returned to training, while Quinn Roux continues to be monitored following a groin injury. 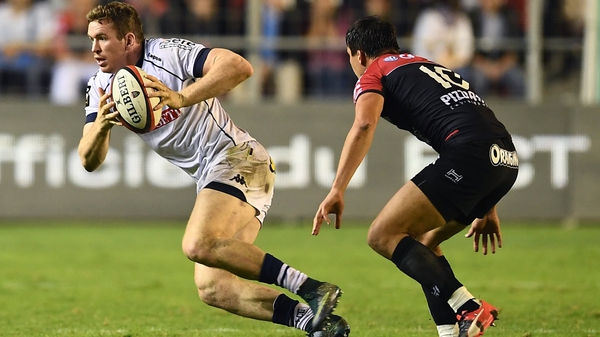