Flanker Sean O'Brien has retained his place in the Ireland side that takes on New Zealand on Saturday at the Aviva Stadium (5.30pm, live on RTÉ2).

The 29-year-old Leinster flanker missed the trip to Chicago two weeks ago but did enough in last weekend’s win over Canada to convince Joe Schmidt of his worth in the side.

O’Brien only returned to action last month, having injured a hamstring in February against France, and will win his 44th cap against the world champions.

"We thought it was probably better that Sean start than come off the bench," said Schmidt.

"Whereas Josh [van der Flier] has been with us for a bit longer, obviously came to Chicago, spent that time with us and did such a good job off the bench that his versatility, his engine at the end of the day might serve us well.

"So it was really just trying to keep the balance there."

The long-term injury to Jordi Murphy had opened up a back-row spot and O'Brien is the only player to retain his place from the 52-21 win over Canada, and the only change to the starting XV that won in Soldier Field.

There is, however, no place in the match-day squad for Munster skipper Peter O’Mahony, also a recent returnee from long-term injury.

The forward was unable to train fully last Monday and judged not ready for selection.

Van der Flier, who replaced Murphy in the 40-29 win over the All Blacks, is preferred among the substitutes.

Having recovered from a shoulder injury, Ulster second row Iain Henderson makes the replacements bench with Connacht’s Ultan Dillane missing out after suffering a minor knee injury against the Canadians.

Winger Keith Earls also misses out with a dead leg.

Paddy Jackson gets the nod over Joey Carbery as replacement out-half with Johnny Sexton and Conor Murray at half-back.

Earlier Steve Hansen, who made five changes to the New Zealand line-up that beat Italy 68-10, called New Zealand "underdogs" for the game but Schmidt refused to concur.

"You'd love to think that we're favourites, wouldn't you?" he said. "But I wouldn't suggest that Steve Hansen become a bookmaker!

"I think we're at about six to one not that we're allowed to indulge in that.

"It's a bit better than the 13 to one we were in Chicago. You certainly wouldn't put us as favourites.

"I think everyone is due a hiccup." 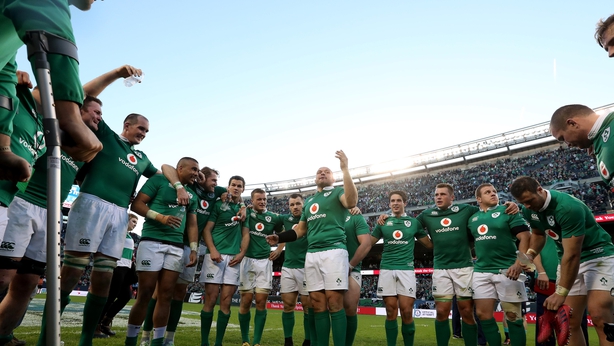 Asked if he thought that his counterpart was playing mind games with the "underdog" comment, Schmidt said: "Based on a recent result he's put his summation on that.

"I don't think he believes we'll pay too much heed to that, because we know the quality they are.

"Part of that quality is their coaching team. I learned a lot off some of the people who are involved there.

"I think they are still in a really strong position.

"We just want to try to focus on our own performance, try to use Chicago as a reference point.

"I certainly don't believe that there was any disrespect from the All Blacks or arrogance in Chicago.

"We've got huge respect for them, how could you not have for a team that's won the last two World Cups?"