South Africa may have seized the momentum in the three-Test battle with Ireland - but centre Stuart Olding belives the tourists can bounce back from their Ellis Park loss to take the series in Port Elizabeth next weekend.

The Ulster youngster said his side must focus on the good elements of their performance in the 32-26 loss as they prepare to take on the Springboks in the final game of their season at Nelson Mandela Bay Stadium.

Ireland lost a 16-point lead in the last quarter in Johannesburg as they struggled to cope with the South African power-game.

The visitors looked a tired side in that last 20 minutes as Warren Whiteley, Pieter-Steph du Toit and Damian De Allende powered through tackles to score.

However, Olding believes Ireland have the capacity to learn from the experience and deliver a series winning display next weekend.

"We're hugely disappointed with how we played in the last 20, but we'll take positives from the first 60 minutes"

"Nothing's changed, the only thing that's different is we're going for the series next week rather than this week," he said.

"Everyone realises that, everyone's disappointed and a bit down but we'll lick our wounds, travel to Port Elizabeth and train well.

"I thought we controlled the game so well in the first half and to go in 19-3 at half-time, it's something special that we had.

"But fair play to South Africa, they came out of the blocks in that second half and really took the game to us with an early score.

"Whenever we got back with another score with the driving maul, I thought we were clawing it back in but they exploded in the last 20 minutes or so.

"We're hugely disappointed with how we played in the last 20, but we'll take positives from the first 60 minutes.

"We'll take the positives and the negatives and go into next week all guns blazing. We'll have a good training week and then hopefully get the win on Saturday."

Olding won his third cap at Ellis Park with his previous appearances for Ireland coming against the United States in 2013 and Georgia a year later.

After experiencing the top level after an injury-hit few years, he is hungry for more.

"I loved every minute of it, it was great to be involved in that game and coming off the back of that win last week I just wanted to get involved as much as I possibly could," he said.

"I thought I went all right, I slipped off a few tackles which I'm pretty disappointed in. But it certainly was the toughest game I've played in.

"For young guys to get exposed to that experience is brilliant. We just have to learn from these things, whenever you're playing against the best teams in the world you've got to take it in. You can't let it pass you by.

"We've got to learn from it and hopefully we become better players for it." 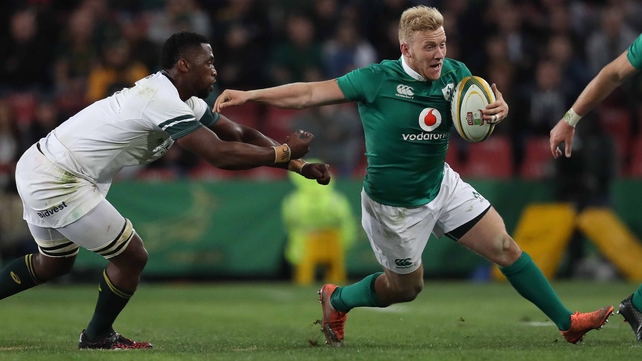 Ireland could be without Robbie Henshaw for the series decider in Port Elizabeth after he injured his knee in the closing stages of the match. CJ Stander is set to return after sitting out game two as a result of his one-week ban.

South Africa have injury worries of their own, with Duane Vermeulen struggling with an elbow injury and Warren Whiteley, who replaced him, complaining of a shoulder problem.

The Springboks are now firm favourites to claim the series - which seemed improbable when they left the field at half-time to the sound of loud booing from the home fans.

Try scorer du Toit said the heavy criticism inspired the home team to be better after the break.

"At half-time we were booed off the stadium and I think we deserved it," he said. "Our second half performance was 100 per cent better.

"We showed what we can do when we start to play and hopefully when we play next weekend we can start with that feeling and not disappoint ourselves or the fans as well.

"It's difficult to describe the feeling. There was anger to come out and start again and show 'we're not that bad'. I think we tried to show that in the second half." 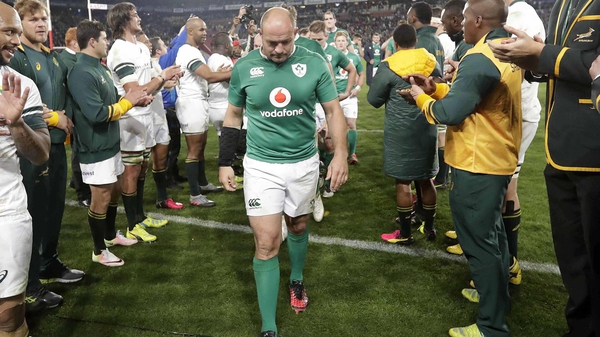