South Africa produced a rousing second half revival as they came from 16 points down to beat Ireland 32-26 on Saturday to level the three-match series at 1-1.

The home side, jeered as they went into halftime trailing 19-3, ran in four tries in the second half in a furious onslaught to set up a series decider in Port Elizabeth next weekend. Ireland won the first test in Cape Town last Saturday.

Paddy Jackson had kicked Ireland into an early lead at Ellis Park and tries from Devin Toner and James Heaslip gave them a 26-10 lead with 30 minutes to go before South Africa put aside a error-driven performance to clinch a narrow victory.

It was a heart-breaking defeat for the Irish, who looked a tired side at the end of a long season and will reflect on an opportunity lost in Johannesburg.

It was a heart-breaking defeat for the Irish, who looked a tired side at the end of a long season and will reflect on an opportunity lost in Johannesburg.

The early signs were not promising for the tourists, who were behind within minutes after Tadhg Furlong was penalised in the first scrum and Elton Jantjes converted from halfway.

The white waves surged Ireland's way, winning collisions and forcing penalties, it looked like it might be a long evening.

But, that early three-pointer turned out to be the home side's only points of the half as the Irish defended well, twice stripping opponents of possession near the line and taking their chances when they came.

Paddy Jackson was the first to rob a Springbok ball-carrier of possession - ripping the ball from Siya Kolisi's grasp as the big back-row surged forward - and within minutes the Ulster out-half levelled the scores at the other end as Francois Louw was penalised for not rolling away. 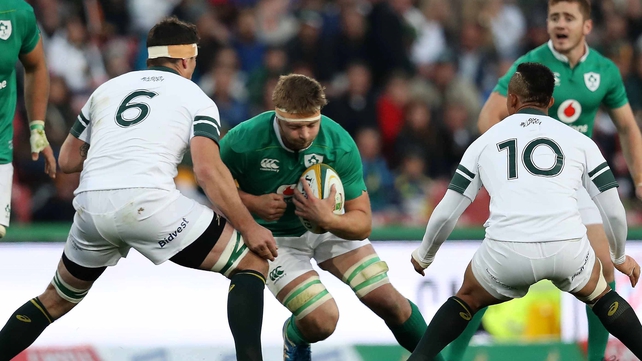 Jackson picked up from where he left off in the first Test and sent the kick over, before he added another as the Bath flanker strayed offside.

There was more defending to do as Devin Toner had to stretch out a long arm to stop Willie le Roux scorching over for a try after a neat Jantjes chip. Still, South Africa came and Conor Murray stopped de Allende before being penalised for not rolling away.

Adriaan Strauss turned down the kickable penalty and went to the corner, but Toner led a stellar line-out defence and, when the hosts went to the backs, Robbie Henshaw stripped de Allende of the ball and Ireland escaped.

A big hit from the influential Ruddock on Strauss set a helter-skelter period of play in motion that finished with Jackson furthering his side's lead after Ireland forced a scrum penalty - and he stretched the gap to nine with another kick when JP Pietersen failed to release before competing at a ruck.

Jantjes struck the post with an effort to level and was handed another opportunity when Toner held the rebound on the deck, but the Lions out-half sent his second attempt wide.

And Ireland punished his wayward kick by striking for the first try of the game as Lwazi Mvovo failed to deal with Jackson's bomb under pressure from Trimble, allowing Jared Payne to pounce and surge to the line. 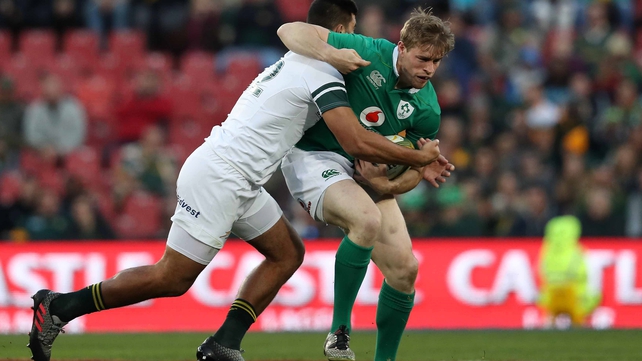 He was held up, but Ruddock took the charge on and off-loaded to Toner - who was not to be stopped from close range.

A stunned Ellis Park watched Jackson convert and, while he missed a penalty attempt to stretch the lead to 18 points, the crowd then booed their side off at half-time.

The Springboks made two changes at the break and came out with a renewed sense of urgency - but they did not have the accuracy to go with it and Kolisi knocked on after a long spell of pressure before Le Roux passed the ball into touch.

Jackson missed a long-range effort when Frans Malherbe came in from the side and Ireland were forced to do more defending when a loose Conor Murray box-kick invited the hosts to counter-attack. Although de Allende put a foot in touch, the referee was playing advantage.

Ireland dealt with the maul again and Craig Gilroy put in a big tackle on Lionel Mapoe, but the Ulsterman knocked on in the process and South Africa had a scrum.

Again, the visitors dealt with the threat as Jackson denied Jantjes but his subsequent clearing kick was returned with interest by le Roux who saw off Jack McGrath, drew Payne and sent Combrinck over.

Jantjes converted but Ireland hit back almost instantly as Furlong blocked Faf du Klerk down and gathered, before South Africa infringed and Rory Best pointed to the corner. Ireland brought it down and mauled, with Jamie Heaslip touching down and Jackson was spot on from the touchline to restore the lead. 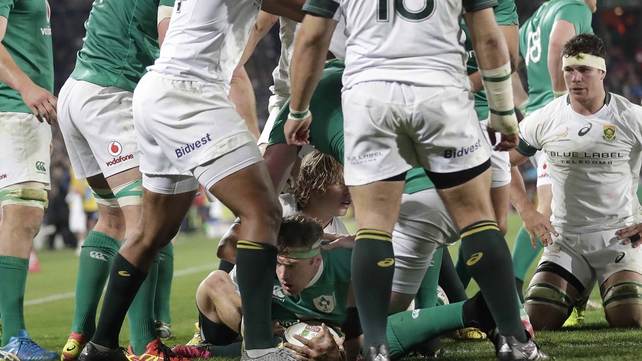 It was a different game now though and Combrinck got the momentum going his side's way by brushing Payne aside, before Whiteley stepped inside Trimble to score.

Jantjes missed the conversion, but the flow was going all one way as du Toit powered over from close range - and the out-half narrowed the gap to four points.

There only looked like being one winner at that stage and so it proved as De Allende swept a tired Murray aside to score.

Jantjes converted and added a penalty for good measure to send the series to a decider in Port Elizabeth. 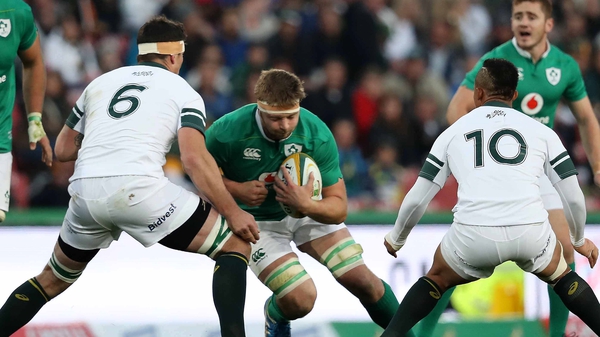 As it happened: Springboks level series with comeback win