Leo Cullen’s attempt to become the third successive Leinster coach to win silverware in his maiden season fell short at Murrayfield, but he was honest in his assessment that the better team won the 2016 Guinness Pro12.

The table-toppers were favourites to claim their fifth title, but Connacht’s remarkable season concluded with a first-ever trophy as Pat Lam’s side emerged victorious on a 20-10 scoreline in Edinburgh.

The semi-final win over Ulster raised hopes among supporters that, despite difficulties along the way this season, the three-time European champions would finish their season in style.

Connacht however had other ideas and the swashbuckling attacking play evident all season proved too strong for their inter-provincial rivals, outscoring their opponents three tries to one on a glorious Scottish afternoon,

Cullen admitted afterwards he could have no complaints on the outcome.

"I'm pretty gutted,” he remarked post-match. “I've got a huge amount of respect for Connacht and what they've achieved. It's been a pretty remarkable season for them and an incredible story. But we didn't perform to the levels that we're capable of.”

When pressed on where his side went wrong, the head coach lamented the opening 40 minutes.

Tries from Tiernan O’Halloran and Niyi Adeolokun gave the westerners a 15-0 interval advantage and the 38-year-old observed that it made for difficult viewing from a Leinster perspective.

"We misfired a little around the set-piece and our ball control, particularly in the first half was poor too. We just coughed the ball up unbelievably cheaply.

“We just couldn’t build any pressure. On the flip side, Connacht were incredibly clinical in taking the opportunities they had.

Cullen was magnanimous in his assessment of Connacht both on the day and over the course of the season and felt it was better to focus on the performance of the seventh side to claim the Pro12 title rather than the shortcomings of his own team.

“We have no complaints,” he said. “We had opportunities. We were not good enough today, which is probably the most disappointing thing."

“It’s Connacht’s day, they had amazing support here. Hats off to them, they have been really consistent performers throughout the course of the season.” 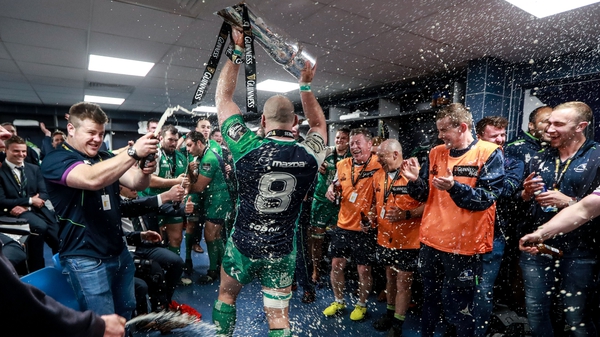 Muldoon: Maybe it was destiny that Connacht won