Leinster head coach Leo Cullen hailed the composure displayed by his side as they continued their dominance over Ulster at the RDS to reach the Guinness Pro12 final.

After navigating their way through choppy waters at times this season, Cullen is just 80 minutes from emulating Joe Schmidt and Matt O'Connor in delivering silverware in his first season after Ulster fell short in achieving what would have only been a second win in the capital since the turn of the millennium.

A 13-point burst in the opening quarter and 17 unanswered points after the interval laid the foundation for success and Cullen admits that after the trials and tribulations of a debut season, he was pleased by his team’s resolve to book their place in next week’s final.

“It’s been a challenging season coming off the back of a World Cup,” he said.

“For such a long period it was hard to get that solid foundation that you would normally have, but they are all reasons/excuses, but we are where we are now.

“There are a lot of ups and downs but we tried to stay the course.”

Isa Nacewa got the home side off to the perfect start and with Johnny Sexton unerring from the tee, Leinster were full value for their early lead before Ulster whittled that down to just two at the break.

Cullen said the response at the changeover was key to the win.

“The guys showed good intensity and raced into a decent 13-point lead,” he added.

“I thought we lost our way a little bit. It got a bit scrappy and Ulster built a lot of pressure.

“The guys were very composed at half-time and re-grouped and delivered a similar message to what we would have done at the start of the game.

The head coach paid tribute to the replacements who helped the “dominance” in the scrum and said that no matter whether it is Glasgow Warriors or Connacht in the decider, the players are keen to finish the season off in style.

“It’s good because it’s a semi-final and you just want to do enough to win the game,” he admitted.

“We need to focus on the next challenge. There’s no point in winning the semi and losing the final. There are a lot of really ambitions players who want to win silverware.” 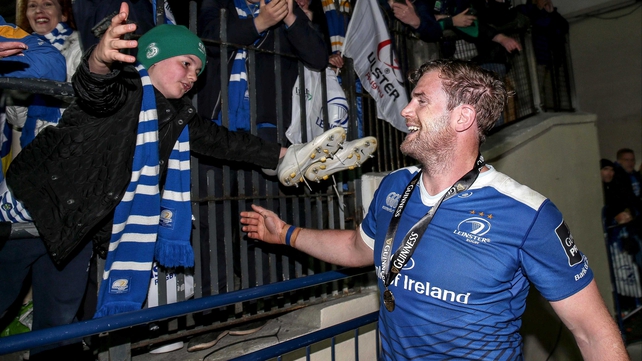 Leinster captain Jamie Heaslip revealed that the American sports drama film Warrior provided his side with extra motivation ahead of the match.

The backrower also felt that perhaps too much was made of the recent defeat away to Ulster, something the squad were less worried about than many onlookers.

“When you look at it in the cold light of day, they scored two tries against 14 men. They should score, which they did.

“I’d suggest that people maybe looked at the scoreline and presumed it was an absolutely shocking day.

“We didn’t get too carried away and knew there was a lot to work on.”

After a disappointing European campaign and some inconsistent performances in the league, Heaslip was asked if there were any fears that victory, even with home advantage, might just have been beyond his side.

“If there was any doubt, it wasn’t in our changing room,” he replied emphatically.

“If I had have seen any doubt in anyone’s eyes, I would have told them to get out of the changing room.

“There’s no place there. When it comes to this time in the competition, you got to have utter most confidence.

“You can’t be cocky, you got to pay the other team respect and they earned it in spades, but you got to have confidence in your own abilities.”

The three-time European winner wouldn’t be drawn on his preference between Glasgow or Connacht  in the final, but is looking forward to a season grand finale in Murrayfield.