Ulster’s dismal record in the RDS and indeed the play-offs continued as Leinster proved too strong to book their place in the Guinness Pro12 final.

Bidding to become the first side to claim an away semi-final victory since the play-offs were introduced in 2010, Ulster fought back gamely after trailing 13-0 after a quarter of an hour, but the second half belonged to Leinster with tries from Jamie Heaslip and substitute Seán Cronin sealing their place in the final in Murrayfield next weekend.

Ulster are left to reflect on another semi-final defeat just three weeks after their comprehensive 30-6 win over the same opposition.

Following that stellar performance, Ulster head coach Les Kiss predicted that the three-time European champions would be a “different beast” and so it proved right from the first whistle.

Forget a game of two halves, the opening 40 minutes in front of a full house at the RDS was a half of two halves as the men in blue began the contest like a team determined to set the record straight. 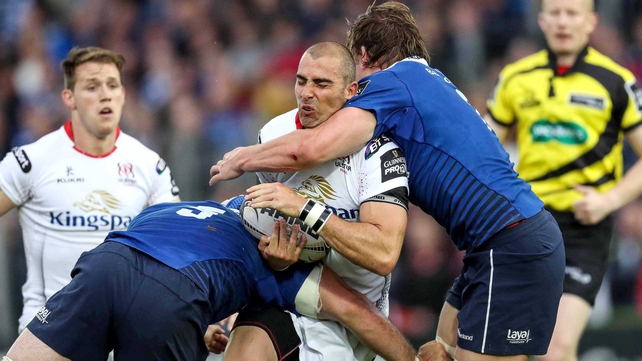 Strong carrying by backs and forwards alike forced the visitors to concede an early penalty, but playing with the advantage, Eoin Reddan's crisp pass out wide found Isa Nacewa lurking on the tramline.

The full-back evaded the clutches of Craig Gilroy and grounded the ball despite the attentions of Luke Marshall and Rory Best.

The TMO Ben Whitehouse confirmed there was no double movement and Sexton made no mistake with the extras.

It was all one way traffic with Ben Te’o and Jordi Murphy carrying hard and 10 minutes later the Leinster out-half had tacked on another two penalties with Ulster fans perhaps fearing that their hopes of just a second win in the capital since the turn of the millennium could be over before half-time.

Slowly however they began to get a foothold with Stuart McCloskey displaying his ballast with ball in hand that Ireland head coach Joe Schmidt has been so impressed with.

Paddy Jackson’s distribution allowed the visitors go through the phases and Luke Marshall pierced the gain line deep in Leinster territory, but when the ball came out wide, Ben Te’o was at hand to bundle the marauding Iain Henderson into touch.

They went close again when Gilroy’s grubber had Seán Reidy chasing down the kick, but Eoin Reddan scrambled to clear the lines.

The pressure eventually told when Jackson got Ulster off the mark after 27 minutes. Five minutes later and he added a second after Davies adjudged that a Leinster defender had gone off his feet and now it was the home side struggling for both possession and territory.

With their tails up, it was Kiss’ side who claimed the final score of the half.

Ruan Pienaar marshalled the attack and the ever-dangerous Gilroy hugging the touchline. The ball found its way out wide and the winger scampered over and Whitehouse was again called on for a decision and awarded the score.

Jackson failed to convert as the visitors trailed by two at the interval and the momentum very much with the visitors.

Ringrose’s elusive running came to the fore and his dancing footwork was instrumental in their second try. The outside centre popped the ball to his midfield partner Te’o and he drew in the defence before his offload allowed Jamie Heaslip to bundle over for his first try of the season.

Leo Cullen could only be pleased with the response of his team and another Sexton penalty pushed the lead to 12 points with a little over 20 minutes left on the clock. 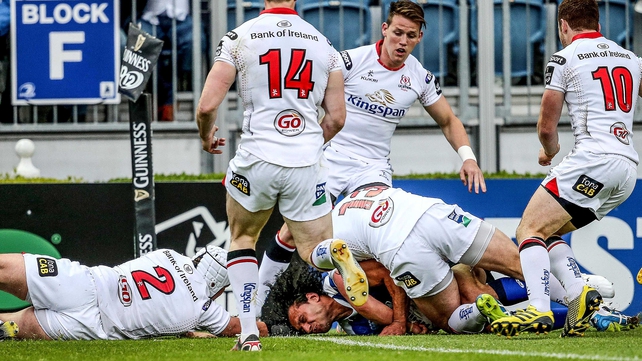 The impact of the respective benches was telling. Zane Kirchner slotted in seamlessly for Nacewa shortly after the break, while Seán Cronin and Tadhg Furlong added to their dominance in the scrum.

Presented with an opportunity to add three points, Sexton chose instead to kick to touch and the pack drove home their advantage with Cronin burrowing over from close range to put clear daylight between the sides.

The visitors continued to soak up the pressure but Gilroy breathed life back into their challenge. Substitute Stuart Olding was first receiver and put the winger through and he raced through to touch down under the posts.

The score edged Gilroy ahead of Connacht’s Matt Healy as the league’s top scorer, but it was too little too late and for all their difficulties at times this season, Leinster are now just 80 minutes away from silverware. 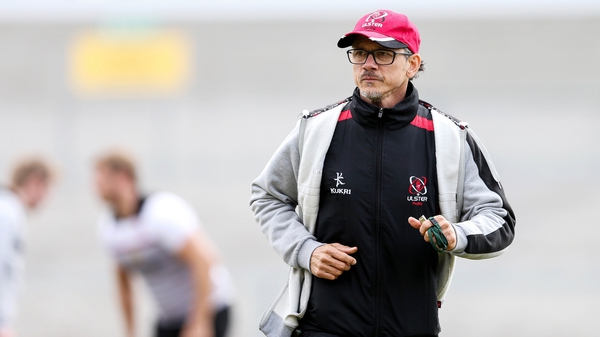 Les Kiss: Smarting Leinster will be a totally different beast