Leinster were left to rue ill-discipline as Ulster consolidated their play-off position in the Guinness Pro12 with a comprehensive 30-6 win at the Kingspan Stadium in Belfast.

Leo Cullen’s side were very much second best after a powerful second-half performance from the home side, but know a bonus-point victory in their final game against Treviso should still ensure a home semi-final with the top two, Connacht and Glasgow, facing off at the Sportsground.

Leinster will however have plenty to ponder from the resounding defeat. After a difficult start that saw the concession of a penalty try and Rob Kearney sin-binned for an infringement on man of the match Ruan Pienaar, the visitors fought back manfully into the contest.

Leinster trailed 10-6 at the break and could have had more of an impact on the scoreboard had they cut down on handling errors in Ulster territory.

The turning point of the game arrived 13 minutes after the interval. Ulster were under continued pressure in their own 22 and struggling in the scrum, but won a crucial turnover from referee George Clancy.

Pienaar, spotting the empty space in the opposition defence quickly booted downfield and within a minute Paddy Jackson slotted a penalty to extend the lead after Luke Fitzgerald became the second player yellow-carded.

The substitute was sent to the stands for interfering with Rory Scholes after a break from Stuart McCloskey and Ulster simply never looked back.

Jared Payne and Jackson added further tries and the home side went close at the death to a bonus-point try before Clancy called an end to proceedings in front of 16,253 spectators.

Les Kiss’ side never trailed in the derby and Jackson, who finished with a 100 per cent kicking record from the tee, got Ulster off the mark after 11 minutes after Luke McGrath had illegally blocked Andrew Trimble.

The home supporters had even more to cheer about six minutes later when Clancy awarded a penalty try after full-back Kearney was adjudged to have taken out the onrushing Pienaar who had chipped through after a line break that involved a dummy run from Trimble. 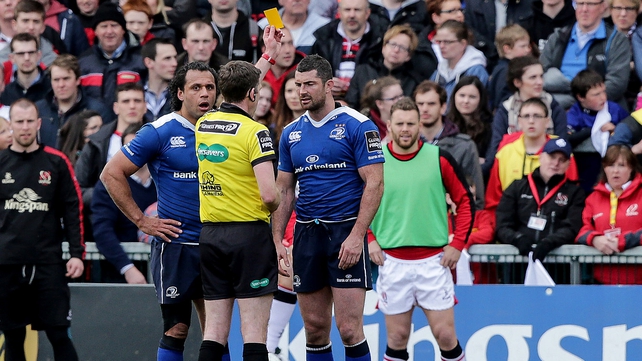 The visitors to their credit fought back and worked their way into the contest. Luke Marshall’s high hit on Josh van der Flier allowed Sexton to cut the gap to four points with his second successful kick at the posts as they went to the break as the side full of momentum.

That trend continued when play resumed in the Belfast sunshine, but Leinster’s ill-discipline was ruthlessly punished after Fitzgerald left the pitch.

Payne was put clear by Luke Marshall's pass after Jackson sucked in Leinster defenders and at 20-6, the only question was whether a bonus point was there for the taking.

Jackson added a penalty after 70 minutes and with two minutes left on the clock, the Ulster out-half intercepted Eoin Reddan's pass to run the length of the field to dot down, with Paul Marshall adding the extras.

A final attack fell short when Scholes was unable to keep control of the ball before Clancy put Leinster and their travelling fans out of their misery. 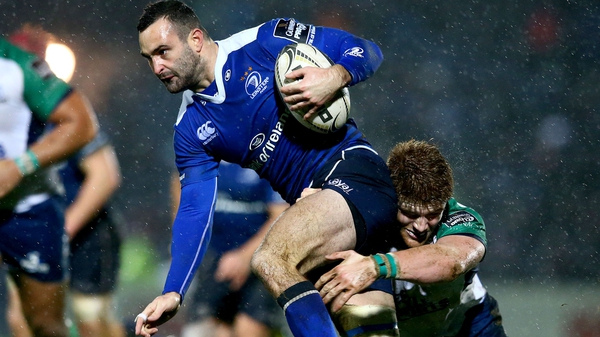