Clontarf are odds-on for home advantage in the play-offs after hammering bottom side Ballynahinch 31-13 at Ballymacarn Park.

'Tarf have moved seven points clear at the top of Division 1A with just two rounds remaining. Their five-try haul included one from senior debutant Neil Reilly, the former Ireland U18 Clubs captain.

'Hinch were very much in the hunt, trailing just 12-10 at half-time with Chris Quinn kicking a penalty to add to lock James Simpson's early try

However, Clontarf's firepower proved too much for their relegation-doomed hosts in the second half. Quinn's second successful penalty was followed by a run of 19 unanswered points from the north Dubliners, including tries from Reilly, Rob McGrath and Tom Byrne.

Replacement back rower Reilly scored from a lineout maul, while Michael Brown, who scored 'Tarf's opener, did the ground work for McGrath's bonus point effort.

McGrath's brother Mick, the hirsute Leinster winger, also dotted down during the opening half, taking his tally for the campaign to 11 tries.

Cork Constitution ground out a tense 16-14 victory over Garryowen in a typically combative Munster derby at Temple Hill.

There was no quarter asked or given during an evenly-balanced first half, with centre Andrew O'Byrne's try, approaching half-time, giving the Light Blues a 7-6 buffer.

With Munster's Shane Buckley making a considerable impact off the bench, Garryowen widened the gap to eight points thanks to Alex Wootton's well-taken seven-pointer.

Wootton has struck late to give his side a 23-19 win over Con back in September, but the Corkmen had other ideas here.

Full-back Tomas Quinlan stepped forward to nail his third successful penalty, adding to earlier efforts in the 10th and 34th minutes, and Aaron Spring - the former Sligo and Ireland underage starlet - emerged as the Leesiders' hero.

The right-winger crashed over in the 72nd minute for his third try in two games. Quinlan's conversion split the sides at 16-14, and 14-man Constitution's luck just about held out. Neil Cronin hit the woodwork with a Garryowen penalty and a subsequent knock-on handed possession back to the victors. 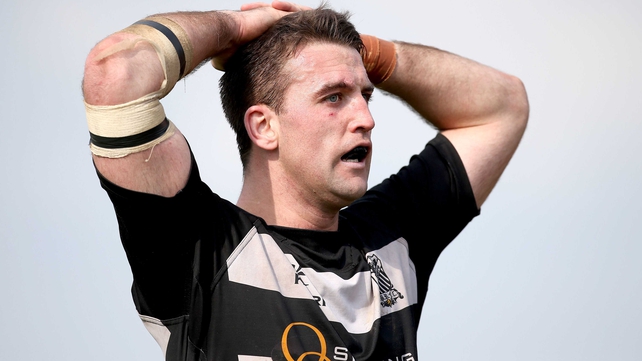 Old Belvedere took themselves clear of the relegation zone with a six-try 32-24 dismissal of Galwegians at Crowley Park.

'Wegians are usually on top form at their Glenina base, but 'Belvo out-thought and outmuscled them with lynchpin captain Jonathan Slattery [pictured] helping himself to two tries.

It had all started so brightly for the hosts as John Cleary exploited some space out wide and centre Api Pewhairangi finished off the attack with his third try in four games.

The Connacht recruit was denied a second try for a forward pass, before Belvedere full-back Daniel Riordan touched down from his own chip through to cut the gap to 7-5.

With a strong wind behind them and a solid set piece platform, the Dubliners forced the issue up to half-time to build a 17-10 lead. Hooker Ed Rossiter and number 8 Slattery both touched down.

Slattery's second of the day in the 44th minute secured his side's bonus point, but 'Wegians got it back to 22-17 after a superb dummy and try from winger Cormac Brennan eight minutes later.

Matt Brown's men had their chances to go back in front, with a lineout maul just held up, a sucker-punch 65th-minute breakaway try from 'Belvo centre Aidan Wynne really hurt the hosts.

There was no way back for the Galway outfit after lock Jack Kelly added his name to the list Belvedere try scorers, following up on a Riordan raid forward.

Tighthead Jason East responded with 'Wegians third try, again converted by out-half Shane O'Leary, but they could not translate a late bout of pressure into two bonus points. Buoyant 'Belvo have moved up to sixth in the standings, while Brown's side have slipped into the relegation play-off spot.

Terenure College lifted themselves out of the relegation play-off spot with a stunning 32-3 triumph over Lansdowne at Lakelands Park.

The defending Division 1A champions - missing the influence of injured captain Scott Deasy - crumbled in the second half as 'Nure tallied up five tries for only their second bonus point of the campaign.

This defeat is a huge setback to Lansdowne's ambitions of retaining the title. They are seventh with two rounds remaining. Fourth-placed Cork Con are six points ahead of them and also have a game in hand.

Mike Ruddock's men never really got going, or were allowed to by a 'Nure side that was marshalled superbly well on the day by try-scoring flanker Kevin O'Neill

An early Jake Swaine try, followed by a penalty from the winger, had the home side 8-0 ahead at the interval. A lone Tom Byrne penalty nine minutes into the second half proved to be Lansdowne's only score.

Further tries from O'Neill, centre Harrison Brewer, full-back James O'Donoghue and replacement Mark O'Neill took James Blaney's men out of sight. They still had a job on their hands to avoid relegation, but they can at least travel south to Cork Constitution for their next outing on March 26 with renewed confidence.

Young Munster climbed above UCD into second place after beating the students 28-13 at Tom Clifford Park.

The Cookies condemned Noel McNamara's youngsters to their third straight defeat, with UCD's challenge for the play-offs now in real danger of going off the rails.

Munsters scored three tries in all, avenging a 56-22 hammering by the students earlier in the season and giving themselves a major confidence boost ahead of their upcoming April 1 derby clash with Garryowen.

Ireland Sevens international Gearoid Lyons put the home side on their way with an eighth minute penalty and he landed another ten minutes later. Full-back Craig O'Hanlon chased down a kick ahead to score the game's opening try, with UCD 11-3 behind at the break.

Eight minutes from the end, replacement Peter Meyer notched the third try via a quickly-taken tap penalty, the prop pouncing with almost his first touch. Lyons converted again, before UCD winger Barry Daly ran in a late consolation effort with his 11th try of the season. 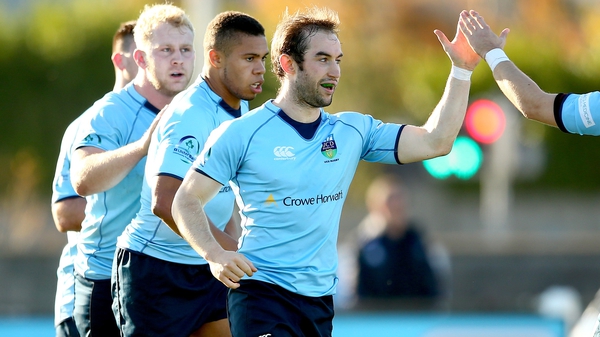