Constitution dominated from start to finish, with Darragh Lyons and Tomas Quinlan using a first-half wind advantage to give the visitors a lion's share of territory.

The 'Hinch forwards struggled to stop the Leesiders' rolling maul, and a 12-man effort helped Con on their way to a 17-0 half-time lead.

Indeed, four of their five tries were scored by forwards with number 8 and captain James Ryan crashing over twice, openside James Murphy scoring just after the break and young hooker Max Abbott grabbing his second in as many games. Replacement scrum half Jason Higgins also got his name on the scoresheet.

The result keeps sixth-placed Con within reach of the play-off positions, while bottom side 'Hinch remain two points behind fellow strugglers Terenure.

Lansdowne's man-of-the-match Scott Deasy nailed a 76th-minute penalty to ensure a share of the spoils with Garryowen at Dooradoyle.

Garryowen never trailed the defending league champions in a tie that ebbed and flowed throughout, and they will be kicking themselves that they lost their grip on a 13-3 first-half lead.

That 10-point advantage came from winger James McInerney's third try in four games and a further touchdown from Munster Academy recruit Conor Oliver, who started in the back row alongside Dave Sherry and captain Josh Hrstich.

But Lansdowne enjoyed a strong finish to the first half, captain Deasy knocking over his second penalty before converting a penalty try as the visiting pack had a purple patch.

It was nip and tuck in the second period, with Garryowen edging back ahead thanks to scrum half Neil Cronin's boot. Deasy, though, had other ideas, and he forced a late draw which keeps his side fifth in the table - two points behind the Light Blues.

A lone second-half penalty from Gearoid Lyons was enough for Young Munster to close out a tight 14-11 win away to Old Belvedere.

Half-backs Lyons and Abriel Griesel combined to score all of Munsters' points in a hard-fought encounter at Anglesea Road, the latter's 62nd-minute penalty proving to be the match-winning score.

Shane McDonald's boot had brought 'Belvo level five minutes into the second half, as the hosts desperately scrambled for their first victory in five league outings.

Paul Cunningham's men did lead 8-6 after athletic lock Connor Owende finished off a 28th minute try, but South African scrum half Griesel's touchdown off a lineout maul gave the Cookies an 11-8 buffer at the break.

McDonald and Lyons swapped further penalties and with defences very much on top, Munsters held on for their seventh triumph in eight matches. They are now level with local rivals Garryowen in third on 34 points and have a game in hand.

Fast-finishing UCD hit Galwegians with 20 unanswered points as the league leaders gained a 33-15 victory at the Belfield Bowl.

However, the students found an extra gear in the final quarter to turn this action-paced Ulster Bank League fixture on its head.

A 72nd-minute penalty from full-back Billy Dardis moved UCD back in front before winger Tom Fletcher finished off an intercept effort for a 21-15 scoreline.

Straight from the restart, Matt Brown's men leaked another try as Brian Cawley gathered it and linked with his second row partner Emmet MacMahon who sent replacement Charlie Cregan charging clear to score.

Centre Conall Doherty completed the rout in the dying minutes, chasing down his own kick through for the game's final seven-pointer. The bonus point success has Noel McNamara's youngsters five points clear of Clontarf at the summit. 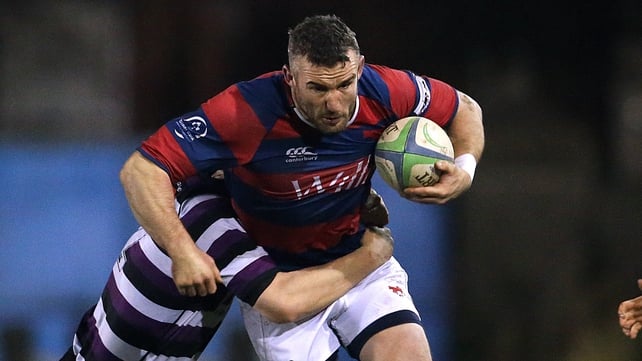 Second-half tries from Aaron Dundon and Matt D'Arcy guided Clontarf to a narrow 18-14 triumph over a determined Terenure College side at Castle Avenue on Friday night.

In a match refereed by New Zealander Glen Jackson, who is over in Dublin for Sunday's Ireland-Wales clash, second-from-bottom Terenure seized an early lead as full-back James O'Donoghue went over for a sixth-minute try, following up on good approach work by Stephen O'Neill and Harrison Brewer.

Clontarf out-half Joey Carbery cut the gap to 7-3 with his first successful penalty in the 17th minute, but he misfired early on the resumption as 'Nure maintained their lead thanks to some gritty defending.

However, after an attempted clearance kick was blocked down five minutes later, Leinster hooker Dundon, who is also part of the Clontarf coaching staff, touched down for his side's opening try.

Carbery converted and tagged on another three-pointer just shy of the hour mark, making it 13-7 to the north Dubliners. Shortly afterwards, 'Tarf's classy centre Matt D'Arcy broke through on the right flank for try number two.

Terenure got a lifeline 11 minutes from time when a strong lineout maul was finished off by lock Mike Murphy with Jake Swaine converting. That set up a nail-biting conclusion, but 'Tarf prevailed to tighten their grip on second place in the standings. They now have a seven-point advantage over third-placed Garryowen.