Munster head coach Anthony Foley bemoaned his side's "annoying" errors at critical junctures after a Pro12 27-24 defeat to Glasgow Warriors that saw them slip to seventh in the table.

Munster fought back from a 14-point deficit before eventually going down in Kilmarnock, and face a real battle to secure Champions Cup qualification for next season.

Foley praised the character of his side as they reacted impressively to a quickfire start from the hosts, but was ultimately left frustrated as Glasgow prevailed in an entertaining clash.

"To run over a lineout five metres from our line and then re-turn it over to them, and for them to score, things that were in our control, to not finish it off is annoying," said Foley.

“After eight minutes if you said we’d get a losing bonus point I’d have thought you were mad but the boys fought back well, they showed great character.

"Going in ahead at half-time showed the way we wanted to play the game and the pace, when we were allowed to get the pace of the game up.

"Unfortunately, we weren’t able to maintain that turning over of the ball at the breakdown, whether that was through them or the referee penalising us for holding on."

Irish flanker Tommy O'Donnell was forced out of action after the break due to a stomach bug, following Robin Copeland down the tunnel after he left the field with a head injury 20 minutes in.

Foley lamented those bad breaks for Munster, but accepted they had to take the loss on the chin.

"It was a bit frustrating. I thought we were good enough at the end. I'm disappointed even though we were 14-0 down, not to come away with the result but then when I look back I can look at the context of everything that happened.

"We played five days ago. To lose Robin Copeland so early in the game... Tommy O’Donnell wasn’t feeling well throughout the first half, we’d to take him off early in the second half.

"There are a lot of excuses there if you want to use them but we were in the position to win the game and it is frustrating to concede a setpiece try." 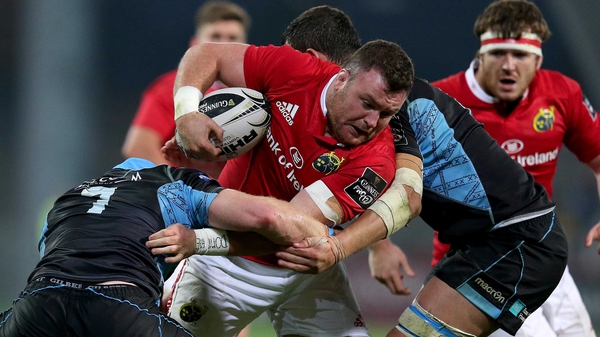