Dylan Hartley has been confirmed as England captain for the Six Nations.

Hartley has led the Red Rose on one previous occasion - against South Africa in 2012 - and replaces Chris Robshaw at the helm despite missing over a year of his career for disciplinary reasons.

"Dylan is an honest, hard-working bloke and I admire his aggressive and uncompromising approach to playing rugby," England head coach Eddie Jones said.

Hartley has been capped 66 times and was the preferred choice for the role after Jones identified that England had drifted away from their traditional strength of fielding an abrasive pack capable of bullying opponents.

The 29-year-old has amassed 54 weeks' worth of suspensions for offences including eye-gouging, biting and swearing at a referee, forcing him to miss two World Cups and one British and Irish Lions tour.

However, his leadership and set-piece expertise were sorely missed during last autumn's global showpiece on home soil and he will skipper England during the Six Nations, starting with the February 6 clash with Scotland.

"It is a huge honour to captain England and a very proud day for me and my family," Hartley said.

"I'm really excited about the challenge ahead, but in reality leading this squad of players will not fall just to me.

"It's essential for the success of this team that we quickly develop and establish a strong leadership group.

"There are a number of guys in this squad who will all have important leadership roles to play so we can take this team forward.

"There is a lot of young talent and potential which is great to see. Our focus over the next two weeks is to work hard and prepare for the Scotland game.

"Playing at Murrayfield will be a huge challenge and one we are all looking forward to."

Hartley, who was born Rotorua, New Zealand, and moved to England as a 16-year-old, was Northampton captain from 2009-14.

"Dylan is an honest, hard-working bloke and I admire his aggressive and uncompromising approach to playing rugby." - Eddie Jones

He has missed seven weeks of this season through concussion and sat out one more game with a rib problem, but started Saints' last two matches against Glasgow and the Scarlets.

"I am delighted to announce Dylan as England captain. I know it will be a very proud moment for him, his club, his family and friends when he leads England out at Murrayfield," Jones said.

"As a former captain of Northampton and someone who has a lot of experience playing for England I have every faith he will lead the team tactically and passionately.

"English rugby is indebted to Northampton to have produced such a fine player and we think he has all the qualities needed to lead this group of players.

"We look forward to working very closely with him to build a successful England team."

An honour and privilege to be leading @EnglandRugby into this coming 6 Nations tournament. Truly humbled by your messages of support ??

Jones views Hartley as the standard bearer of his quest to restore the core strength of English rugby.

"Dylan can lead the side with the sort of attitude we want. We want a team with an uncompromising feel about it. The biggest risk was to not take a risk," Jones said.

"I was telling a few of the players that when I was coaching Australia against England, we felt if we could get parity in the scrum and maul, we knew we could win the game.

"We need to get back to that English style of play that's based on a strong scrum, driving maul and uncompromising cleanout.

"Dylan has been successful as a player. He has 66 caps and has been a successful captain for Northampton. He's experienced, he plays like that and he will lead like that, so the players will follow him."

"I didn't really sleep last night because I was so excited and proud." - Dylan Hartley

Jones admits the change in leadership had been unkind to Robshaw, who skippered England throughout Stuart Lancaster's four-year reign.

"Let's get one thing right, it's not about what Chris Robshaw didn't do," Jones said.

"I had a meeting with the team and I said Chris has done a fantastic job for England over the last four years, but we've decided to take a new direction.

"It's been a difficult time for Chris, but he's still an important part of the team and I know he will support Dylan."

Hartley learned on Sunday night that he was captain for the Six Nations and insists the "past is the past" when reflecting on his lengthy list of misdemeanours.

"Me and Eddie had a chat a few weeks ago. Nothing was confirmed. He just told me to get playing rugby, play well and get in the team," Hartley said.

"Last night I got a call to come down for a meeting. I was a bit nervous. He asked me if I wanted to do the job, put his hand out.

"I think I might have snapped his hand off and didn't let go. I didn't really sleep last night because I was so excited and proud.

"I always said I'd get back in an England shirt and here I am. I want to lead by playing well. The past is the past. I'm really excited about this tournament and getting stuck in." 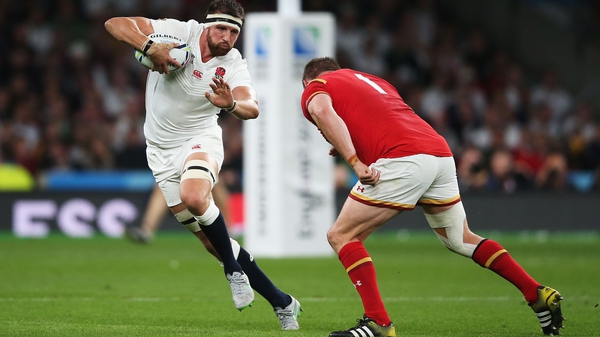