Josh Beaumont, son of former captain Bill, was one of seven uncapped players included in Eddie Jones's first England squad on Wednesday, while several regulars of the previous regime have been culled.

Jones named a 33-man Elite Player Squad, effectively his squad for the Six Nations championship starting next month with England visiting Scotland in their first game on 6 February.

Sale's Beaumont (below) is a powerful number eight in the mould of his father, one of England's most iconic players who led them to the grand slam in 1980 and captained the British and Irish Lions the same year. 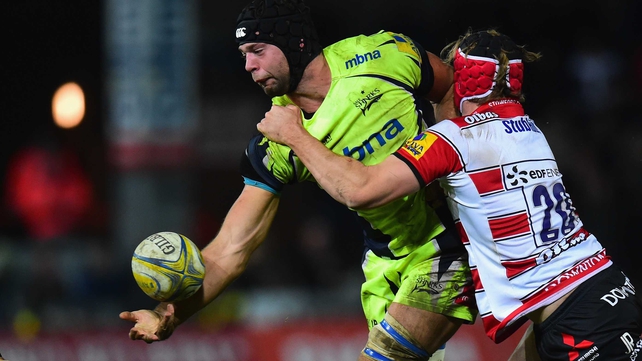 Flanker Jack Clifford, who has taken over as openside flanker at Harlequins from England's World Cup captain Chris Robshaw, is also included, as is Robshaw, who is now playing on the blindside.

Wasps centre Elliot Daly is included and has a chance to press for a team slot in the absence of injured Henry Slade, while Sam Hill, Paul Hill, Ollie Devoto and Maro Itoje are also included hoping for a first cap.

Centre Manu Tuilagi, who last played for England in June 2015 and returned to the Leicester team last week after a 15-month absence with a groin problem, was not included in the squad but will be considered after the early games of the Six Nations.

Several players who were regulars under Stuart Lancaster have been left out, including centre Luther Burrell, who was a surprise omission from the World Cup squad having been a regular in last year's Six Nations.

There was also no place for Danny Cipriani, whose international career now looks to be over after never really getting going, while Richard Wigglesworth also missed out.

Gloucester's Matt Kvesic, seen by many as the answer to England's search for a ball-snaffling number seven, was also included.

There was a recall for winger Chris Ashton, who played only two Tests since 2013 but has continued to score tries for Saracens, and Harlequins' Marland Yarde, with both men hoping to take advantage of the season-ending knee injury of Jonny May.

"The long-term strategy for England is to develop a side who can be the most dominant team in world rugby, so we have chosen a lot of new players on the growth we see in them," Jones said in a statement.

"We see these players growing into England players of the future and developing into a side who can be the best in the world. Our aim is to develop a squad where there is depth and competition in every position," added the Australian, who will name his captain at a later date.

7 - the number of uncapped players named by Jones ahead of next month's Six Nations opener against Scotland.
66 - the number of Test match appearances made by Northampton hooker Dylan Hartley, the most-capped player in Jones' squad.
8 - the biggest player representation for one club belongs to reigning Aviva Premiership champions and current league leaders Saracens.
20 - the age of Northampton prop Paul Hill, who is Jones' youngest squad member.
21 - the number of players in England's 2015 World Cup squad who made the cut.
297 - the combined cap total of the nine other squad members left out by Jones.
3 - only three of the 12 Premiership clubs do not have a squad representative, namely Worcester, Newcastle and London Irish.
24 - the number of days before Jones' first game in charge against Scotland at Murrayfield.
13 - the number of years since England have won a Six Nations Grand Slam.
19 - recalled Saracens wing Chris Ashton's try tally for England.
2 - two Premiership clubs have just one player each in the squad - Gloucester (Matt Kvesic) and Sale Sharks (Josh Beaumont).