Garryowen enjoyed an encouraging start to the New Year when they got the better of Clontarf on a 10-3 scoreline at Dooradoyle. The result moved Conan Doyle's charges up one place to third in the Division 1A table, just five points behind the north Dubliners.

Neither side could manage a score in a dour first half. The best chance fell to the Light Blues just on the interval, but their goal-kicking scrum half Neil Cronin was unable to convert, with Clontarf having missed two penalties of their own.

Garryowen, who suffered a 39-25 defeat at 'Tarf last month, conjured up the game's only try on the back of some excellent interplay between the forwards. It gave winger James McInerney the opportunity to knife through and touch down by the posts with Cronin converting.

'Tarf finally got off the mark thanks to a well-struck penalty from full-back Rob Keogh, but David Johnston punished a high tackle with a closing three-pointer which brought the visitors' four-match unbeaten run to an end. 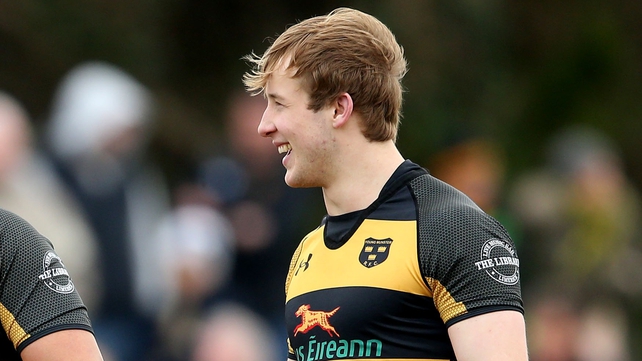 Galwegians outscored Young Munster by three tries to none as they kicked off 2016 with a well-judged 15-12 win at Crowley Park this afternoon.

Former Young Munster player Ed O'Keeffe grabbed Galwegians' opening try four minutes in, a quick turnover allowing him to hack through and score his sixth of the campaign.

Centre Lyons cut the gap to 5-3, but a penalty reversal and yellow card for Young Munster lock Mike Madden invited 'Wegians forward again. Blindside flanker Kelly duly got over out wide at the end of a well-executed lineout maul.

The hosts had to battle through number 8 Anthony Ryan's sin-bin period. They leaked a drop goal to Cookies out-half O'Mahony and then, just before the break, Lyons reduced the arrears to a single point - 10-9.

Pressure in the scrum yielded a further penalty for Lyons, early in the second period, and the Ireland Sevens international converted to move David Corkery's men in front for the first time.

However, 'Wegians had some good firepower on the bench in the form of Doron McHugh, Aidan Moynihan and New Zealander Api Pewhairangi, and from another close-in set piece, a second unconverted effort from Kelly proved decisive with five minutes left.

Lansdowne got their League season back on track with a 29-24 bonus point triumph over bottom side Ballynahinch. Elusive winger Ian Fitzpatrick bagged a brace of tries on the Aviva Stadium's back pitch.

'Hinch were hoping to complete a notable double over last year's champions, having beaten Mike Ruddock's men 25-13 at home last month. But Lansdowne were in clinical form in the first half as they cruised into a 24-9 lead.

Former Ireland Under-18 Schools captain James Ryan, who paired up with Philip Donnellan in the second row, touched down for the second game running, while Lansdowne captain Scott Deasy contributed 14 points in all - a try, three conversions and a penalty.

The five-point return sent Ruddock's side back up to fifth in the standings, leaving them just a point outside of the play-off zone.

But Ballynahinch deserve plenty of credit for their second half fightback as tries from winger Adam Craig and livewire number 8 Conor Joyce, coupled with 14 points from Chris Quinn's trusty boot, gave them their third losing bonus point of the campaign. 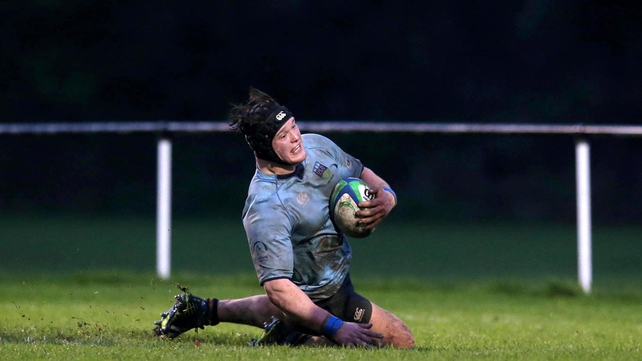 UCD had the measure of local rivals Old Belvedere for the third time in recent weeks, as a three-try salvo steered the table-topping students to a terrific 23-6 victory at Anglesea Road.

Ireland Under-20 prop Andrew Porter raced clear in the final play to seal UCD's fifth win on the trot, adding to their Ulster Bank League and Leinster Senior League Cup final successes against 'Belvo from last month - 20-12 at Belfield and 23-13 at Donnybrook.

There was not much between the sides during a fiercely competitive opening half, the difference on the scoreboard (13-6) being a really well taken try from UCD's superb flanker Peadar Timmins who took a great line to dive over by the posts.

Jamie Glynn, who started at scrum half in place of Leinster's Nick McCarthy, was also influential as the Division 1A leaders established a seven-pointer buffer. His half-back partner Liam Bourke converted the try and kicked two penalties, with Belvedere number 10 Steve Crosbie slotting two place-kicks.

Lovely hands across the back-line gave winger Barry Daly enough space to go over in the left corner for his seventh try of the league season. 'Belvo were still very much in the game, though, as they tried to take advantage of a yellow card for UCD blindside Josh Murphy.

But the likes of Timmins, Sean McNulty and Porter came up with some vital turnovers as the College defence remained on top. Daly also did really well to prevent a certain try for 'Belvo's nippy scrum half Charlie Rock, and hard-working loosehead Porter added the final gloss with his late try.

Tomas Quinlan contributed 12 points off the bench, including the bonus point try, as Cork Constitution ran out impressive 32-22 winners over Terenure College at Lakelands Park.

It was all Constitution in the early stages, out-half Darragh Lyons nailing his first penalty attempt and a strong 10th-minute lineout maul sending flanker James Murphy over for a converted try. The margin was out to 15-0 after Terenure's James Thornton had a clearance kick charged down by Brian Hayes and the latter's second row partner Conor Kindregan, following a number of close range drives, eventually touched down for the visitors.

'Nure hit back with a 29th minute penalty from Thornton to make it 15-3 for half-time and with Risteard Byrne and John Dever making an impact off the bench, the Dubliners were enjoying more possession and territory. Their persistence paid off in the 57th minute when Dever crashed over at the end of a forwards drive.

But that only served to rouse Cork Con. Moments after his introduction for Lyons, Quinlan knocked over a close range penalty and then with a quarter of an hour remaining, winger Rob Jermyn raced onto a kick into the 'Nure half to touch down in style.

Terenure replied with a try from full-back Ian Hanly, who profited from Thornton's neat lay-off, and Stephen O'Neill's conversion made it a ten-point game. But again Con had the answer, with Quinlan breaking through for his bonus point score in the final minutes.

Although 'Nure scrum half Kevin O'Neill helped himself to a consolation try right at the death, James Blaney's charges missed out on a losing bonus point and they now find themselves second-from-bottom in the table. 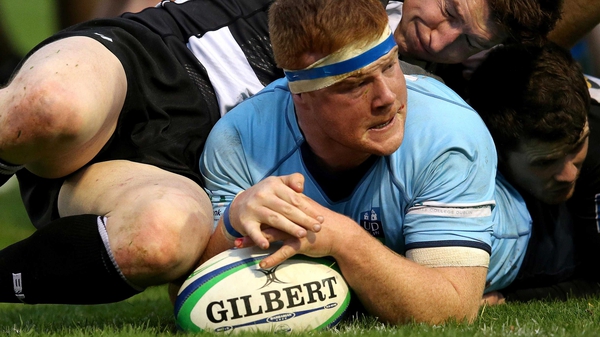 Ulster Bank League roundup: UCD and Clontarf pull away at top of the tree