UCD ensured they will be joint top of the tree with Clontarf over Christmas after maintaining their winning form with a 20-12 defeat of Old Belvedere on Saturday afternoon.

In their final league game of the calendar year, the students had the benefit of a very strong wind at the Belfield Bowl and duly swept into a 15-0 interval lead. From a five-metre scrum on the quarter-hour mark, the ball was moved wide for winger Tom Fletcher to squeeze over in the left corner.

Leinster's Ross Byrne missed the conversion and a tricky penalty in the 33rd minute, but UCD enjoyed a productive spell approaching half-time. A lineout maul was finished off by former Ireland U-20 prop Jeremy Loughman, and Byrne tagged on the conversion and a superb penalty from the 10-metre line.

UCD were unable to capitalise on a yellow card for 'Belvo lock Jack Kelly and it was not until the 63rd minute that flanker Peadar Timmins forced his way over following a succession of five-metre scrums.

The hosts' sixth league win looked assured, but 'Belvo bounced back with two closing tries - the ever-influential Riordan struck in superb fashion in the 74th minute and a prolonged spell of pressure yielded a score for Kelly.

However, the latter conversion was missed by Aidan Wynne, meaning Paul Cunningham's men missed out on a losing bonus point. The teams meet again in the Leinster Senior League Cup final in two weeks' time. 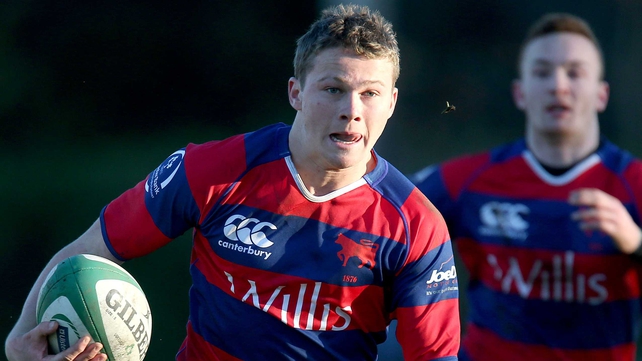 UCD and Clontarf are locked together on 31 points at the top of the table, with an eight-point gap between them and third-placed 'Belvo. 'Tarf picked up only their second try-scoring bonus point of the campaign with a 39-25 victory over Garryowen.

Leinster winger Mick McGrath was in dominant form for 'Tarf, helping himself to a hat-trick of tries with fellow backs Conor O'Brien and Dermot O'Meara also touching down.

A terrific individual score from young centre O'Brien was added to by the bulldozing McGrath to give the hosts a 15-8 half-time advantage, cancelling out an earlier try from Garryowen winger James McInerney.

McGrath and Munster Academy recruit Conor Oliver swapped tries before the former followed up on an excellent Evan Ryan break to complete his hat-trick and secure Clontarf's bonus point at 29-15.

The Light Blues produced a strong finish, though, battling their way to a try-scoring bonus point as replacement Ronan O'Halloran and impressive scrum-half Neil Cronin both crossed the whitewash.

In between, 'Tarf gave themselves enough of a cushion thanks to O'Meara's seven-pointer and a penalty from his half-back partner Joey Carbery, who kicked 14 points to take his season's tally to 93.

Struggling Ballynahinch threw off the shackles at a windswept Ballymacarn Park to claim their very first win of the league run - a deserved 25-13 triumph over defending champions Lansdowne.

The division's bottom side gave themselves a very timely boost after eight defeats on the trot, with a late first-half try from loosehead Craig Trenier lighting the touchpaper for a rousing final 40 minutes.

Lansdowne still led 6-5 at the turnaround thanks to two Scott Deasy penalties, but their hopes of retaining the title took a serious dent as they slipped to a fourth loss in six games.

A Chris Quinn penalty edged 'Hinch in front on the resumption, with tighthead Jonny Simpson soon joining Trenier on the scoresheet courtesy of another powerful set of phases from the home pack.

Quinn converted and tagged on a second successful penalty, before a first league try for former Ireland U-18 Schools captain James Ryan, which Deasy converted, brought it back to 18-13.

In what could prove to be a season-defining moment, 'Hinch's Ulster scrum half Paul Rowley pounced for the clinching try to give Derek Suffern's side a long-awaited maiden victory.

Ballymena came from 12 points down to overhaul Old Wesley in very blustery conditions at Donnybrook and claim a hard-fought 21-15 win.

Meeting the Braidmen for the first time in two years, Wesley got off to a strong start with a neat 'show and go' from Ian Cassidy seeing the scrum-half and captain go over for a converted try.

Influential lock Iain McGann stretched over for an unconverted effort to make it 12-0, but Ballymena reduced the arrears with a penalty try when Wesley infringed at an advancing lineout maul and their loosehead Martin Gately saw yellow.

Into the second period and with both sides looking lively in attack, Andy Graham's men edged in front thanks to a try from number 8 Matthew Rea off a five-metre scrum.

The lead changed hands again when Wesley winger Barry McLaughlin landed a penalty for 15-14, but Rea's second touchdown of the afternoon, and fourth in as many games, steered the visitors to four more precious league points.

Ballymena remain in second place and right in the hunt for promotion at the halfway point of the season, with leaders St Mary's College just two points ahead of them.

St Mary's enjoyed their fifth win on the trot as they ran out 32-16 bonus-point winners over bottom side Belfast Harlequins at Deramore Park.

The pacesetting Dubliners, who led 20-8 at the turnound, had tries from centre Marcus O'Driscoll and forwards Mark Fallon, Brian McGovern and Barry O'Flanagan. Out-half Sean Kearns pushed through the 100-point barrier for the season, contributing 12 points off the kicking tee for an overall tally of 101.

Harlequins notched a try and penalty goal in each half, winger Andrew McPhillips and flanker Matthew Fisher both touching down with Ulster 'A' centre Mark Best booting their two place-kicks.

In arguably the game of the day, third-placed Dublin University kept pace with the top two thanks to a tremendous 36-11 dismissal of Shannon at College Park.

The Limerick side arrived in the capital on the back of four straight victories, but the strong-running students taught them quite a lesson with a five tries-to-one beating, extending their own winning streak to seven matches in the process.

Trinity's left winger Max McFarland was a class apart, running in a hat-trick of tries - including an early breakaway effort from 70 metres out. That score, adding to Brian du Toit's initial try, had the hosts 14 points to the good.

Loosehead Eric O'Sullivan got in on the scoring act to make it 19-0, but Shannon dug their heels in and took advantage of a Trinity sin-binning, as an Ollie Lyons try and two Tadhg Bennett penalties reduced the margin to eight points.

The game was delicately poised now, Marcus Horan's men becoming more and more competitive until Trinity stung them with a Jack McDermott penalty and McFarland's bonus point score which was created by a cracking outside break from full-back Conor Kearns. A steal by openside du Toit, close to his own posts, then launched another thrilling counter which ended with McFarland dotting down for the final time.

In Saturday's early kick-off, UL Bohemians came from 13-3 down to snatch a badly-needed 20-13 success against Buccaneers on the 4G pitch at the University of Limerick.

While the pitch was perfect, the weather conditions were awful with a strong wind and persistent rain. Bohs played with the aid of the breeze in the first half and they went in front thanks to a seventh minute penalty from out-half Rick McKenna.

The Buccaneers forwards enjoyed a number of dominant spells, however. When UL had a player in the sin-bin, the Pirates forced a close-in scrum which was brought down and a penalty try was awarded. Their South African number 10 Cameron Hertz converted.

It remained 7-3 at the interval and two more penalties by Hertz looked to have Buccs on their way to a first triumph in five league outings.

The determined openside nabbed the first of two tries five minutes from the end, and then as Buccaneers piled on the pressure, Condell made an interception and raced over from halfway to end his side's two-match losing streak.