There was largely positive news for Munster on the injury-front ahead of Saturday’s European Champions Cup clash with Leicester Tigers at Thomond Park.

While both Connacht and Ulster have been decimated due to injury, Munster coach Anthony Foley is welcoming players back to full fitness.

Murray had a bruised bone in his foot, Ryan had a rib problem, Sherry was struggling due to a knee complaint whilst Botha has passed the return to play protocols following a knock to the head.

Andrew Conway and Jack O’Donoughe also trained and are likely to be available for the Tigers clash having both been sick last week.

However, it wasn’t all good news for Foley and Munster as former Ireland scrum-half Tomas O'Leary didn't train due to back spasm.

Centre Francis Saili is still feeling the affects of a calf injury and though he took part in some rehab running on Tuesday, he will be monitored by Munster’s medical staff for the remainder of the week.

Leicester top Pool 4 with two wins out of two and though Munster remain unbeaten, they are five points behind in second because they have only played once in this year's competition.

Their other pool game against Stade Francais was postponed last month in the wake of the recent terrorist attacks in Paris. That game has been rescheduled for the New Year.

Munster play Leicester in back-to-back European games and will travel to England for the return tie on Sunday, December 20. 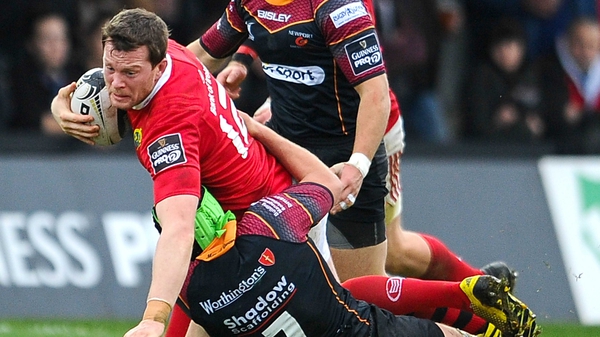