League leaders Connacht had won all their PRO12 fixtures since their 36-31 victory over the Blues in the reverse fixture at the beginning of October but they could not complete a first league double over the Welsh region.

Both sides scored twice but it was the boot of Wales international Rhys Patchell that proved to be the difference as he struck two conversions and two penalties to give the hosts only their second league win of the season.

Blues number eight Manoa Vosawai got the home side off to a flying start with a try after just six minutes when he crashed over from a driving lineout. Patchell added the extras.

But after an impressive start they were punished for a number of mistakes in their own 22, as Connacht scrum-half Ian Porter crossed in the corner following good work by Matt Healy.

It was the visitors who scored next, again from a driving lineout, when number eight Eoin McKeon collected the ball at the back of a maul and went over from two metres.

Porter had put both his conversion attempts against the post so full-back Patchell was able to draw the Blues level with a penalty after 25 minutes.

A minute later Porter responded with a penalty of his own to put the visitors 13-10 ahead at the break.

Patchell missed the opportunity to draw the Blues level with a penalty from straight in front of the posts eight minutes after the interval but it did not take long before the home side were back in front.

After putting Connacht under pressure deep in their half the home side moved the ball wide for wing Tom James to cross the whitewash, with Patchell adding the extras.

A huge penalty kick from Patchell put the Blues ahead by seven but Connacht outside-half Jack Carty soon clawed three points back with a kick of his own.

Connacht tried to force themselves back into the contest in the closing stages and almost got a try seven minutes from time when centre Bundee Aki went rampaging through the Blues' defence before losing the ball.

The visitors did get over the Blues line with less than four minutes on the clock but after going to the TMO it was decided that the ball had been knocked on at the maul and the home side were able to clear from the resulting scrum. 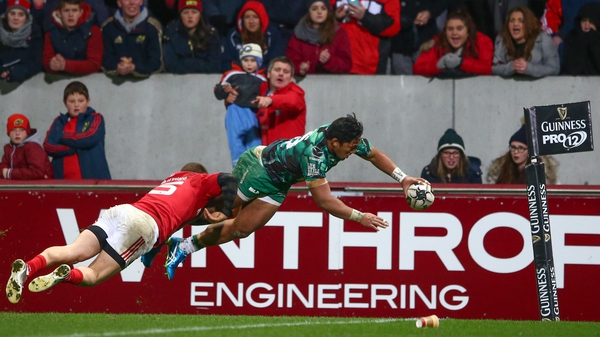