Man-of-the-match Aki's diving one-handed finish in the left corner with three minutes left was an apt way for Connacht to finish.

This, after all, was the night when they wore superhero 'Green Lantern' jerseys - a tie-in with their kit suppliers BLK and DC Comics.

Pat Lam's men played almost all of the rugby in the first half, their execution and intensity far superior to Munster's as Tiernan O'Halloran's opportunist 17th-minute try gave them a deserved 10-5 interval lead.

Munster, who answered back with a Niall Scannell maul try, made notable improvements to their play in the third quarter, but a 33-metre penalty from Craig Ronaldson edged Connacht further in front.

The westerners then suffered the double blow after 64 minutes.

Captain John Muldoon was sin-binned for pulling back Andrew Conway in a try-scoring situation, though the decision by referee Ben Whitehouse to award a penalty try seemed harsh.

However, Lam's side showed impressive resilience in defence before Robbie Henshaw's excellent offload out of a tackle sent Aki through for the clinching five-pointer.

In a lively opening, opposing Kiwi centres Aki and Francis Saili both made breaks and the Connacht forwards were prominent, showing impressive footwork with ball in hand.

Munster missed 11 tackles in the opening 14 minutes and 22 by the interval - one of those defensive lapses saw hooker Scannell allow O'Halloran clean through for his try just to the right of the posts. Ronaldson's conversion made it 10-0. 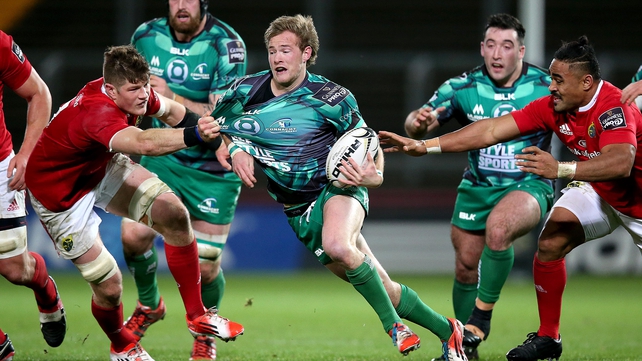 Munster were quick to respond, kicking for the corner after Ronaldson was penalised for not releasing on the deck.

The pressure told after successive lineouts with Scannell plunging over from a well-controlled drive.

Ian Keatley was wide with the conversion attempt and both defences tightened up in the second quarter, the slippery conditions not helping the players as a number of handling errors ended attacks.

Ronaldson's penalty on the hour mark, set up by some excellent ruck work from Muldoon, kept Connacht on course.

However, breaks from Earls and Keatley got Munster into try-scoring range and Muldoon's impeding of Conway in the 22 resulted in a yellow card and penalty try which Keatley converted.

It looked a very harsh call by referee Whitehouse and TMO Simon McDowell as Marmion, pictured above, was doubling back and likely to challenge Conway close to the try-line.

With their lead cut to 13-12, Connacht missed an opportunity to steady their nerves when Ronaldson sent a kickable penalty wide from the right.

But rather than defend the one-point margin, they attacked with great ambition and got their reward when Henshaw's neat break on the Munster 22-metre line and flat offload sent Aki diving over past Conway.

It was a magical way to end Connacht's 29-year winless streak in Limerick. 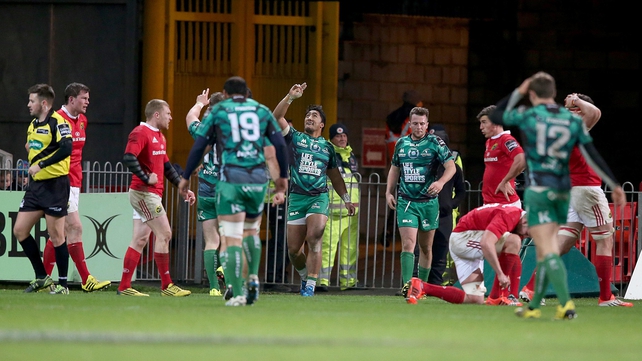 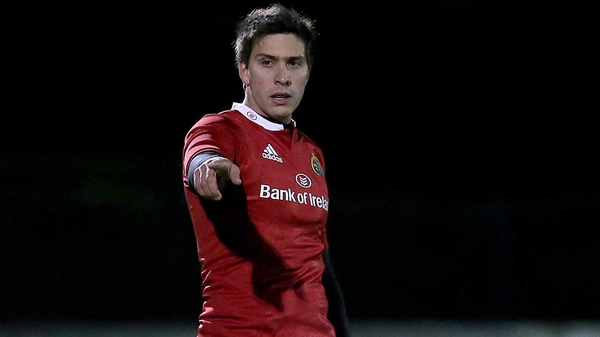