Ireland's Paul O'Connell has said he hopes to help the side finally achieve their potential at the Rugby World Cup.

Speaking at Dublin Airport as the squad departed for the UK, O'Connell said: "As an Irish team we haven't always fulfilled our potential at World Cups, and that's what I'd be eager the help the team do."

The legendary lock said the squad is eager to get to Cardiff and sample the tournament atmosphere.

"It's great to finally get on the plane, everybody else is over there already. When the World Cup is on in New Zealand or Australia, you leave 10 days before it and get into the buzz of it, but we're leaving three days before so I think a lot of guys are eager to get over there and sample the atmosphere."

O'Connell will hang up his green jersey for good after the tournament, but is not looking forward to it all being over.

"I'm not looking forward to finishing playing with Ireland, it's an incredible experience.

"It's not just an incredible experience, it's great fun, a great bunch of lads, brilliant staff, even the set up we have in Carton House is out of this world.

"It's going to be very hard to find something to replicate that, but everyone's career moves on and you just have to move on and make the most of it.

"Hopefully, before that happens we can go and have a good tournament.

Despite his impending international retirement, the Limerick man is keeping his emotions in check.

"It’s not emotional, I'm excited, I'm looking forward to it.

"I'll look back at it after the tournament, but at the moment I'm just intent on going there, enjoying it and trying to make sure I play to my potential and we play to our potential."

The squad were in giddy form at Dublin Airport, with O'Connell likening the trip to a school tour.

"Today adds to the buzz of the whole thing, getting on the bus at Carton House, coming out here and the reception we had.

"It's a very special occasion, I've been lucky enough that I haven't been injured when the World Cup come around and this will be my fourth one. It's an incredible experience.

"As an Irish team we haven't always fulfilled our potential at the tournament and that's what I'd be eager to help the team do."

There was one downside for O'Connell - he was not one of the four players selected by Aer Lingus to adorn the side of the plane that will take the team to English capital.

However, given the general giddy mood in the camp, he took the disappointment in his stride. 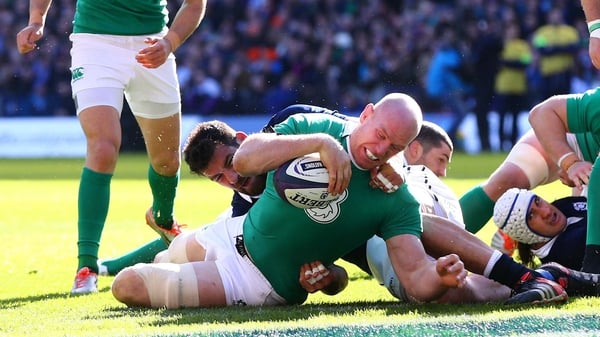