Paul O'Connell will play his final game for Ireland at the Rugby World Cup after the IRFU confirmed that he will retire from the international game after this year's tournament in England.

O'Connell had already revealed that he will leave Munster this summer and the IRFU have confirmed that he will be released from his contract with both country and province following a request from the player.

The Limerick man is expected to see out his playing career in France and has been heavily linked with a two-year deal at Toulon.

O'Connell, who was contracted with Munster and Ireland until June 2016, said: "I would like to thank Munster Rugby and the IRFU for releasing me from my contract at the end of the Rugby World Cup.

"I have been hugely fortunate to play with one of the greatest sporting organisations in the world and as a proud Limerick, Munster and Irishman, I will forever treasure my association with Munster Rugby."

"It is my genuine hope and ambition that I will have some future involvement with Munster and Irish Rugby."

The lock also revealed his desire to return to Munster once his playing days are behind him, hinting at a coaching role with the province.

"After the World Cup I would like to experience new environments, and it is my genuine hope and ambition that I will have some future involvement with Munster and Irish Rugby," he said.

"I would also like to thank all Munster and Irish Rugby fans for their support and I look forward to them showing why they are regarded as the best supporters in world rugby as Ireland travel to the Rugby World Cup in England in September."

Philip Browne, IRFU CEO, paid tribute to O'Connell and said that he has raised the bar by which other Irish internationals are judged.

"Paul has been a fantastic servant to Irish Rugby. Over the course of his 101 Ireland caps to date he has set the standard for the model Irish professional," Browne insisted.

"His contribution to Irish Rugby is immeasurable in terms of not only driving success on the field but also raising the profile of Irish Rugby around the world."

O'Connell has won 101 caps and will lead Ireland's assault on the looming World Cup, a tournament they enter as Six Nations champions. 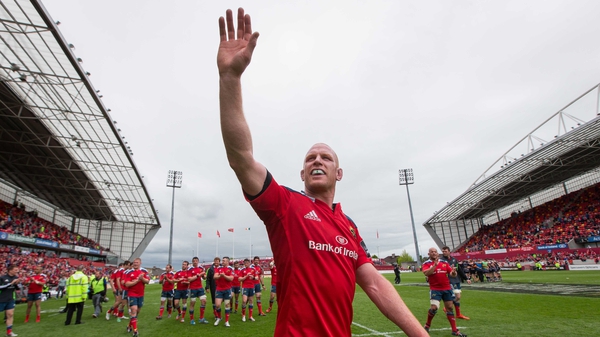 Paul O'Connell: It's probably my last game at Thomond