Paul O'Connell has "changed beyond belief" in a late-career surge that has earned him his two-year move to Toulon, according to Reggie Corrigan.

Ireland captain O'Connell will join triple European champions Toulon after the autumn's World Cup, that will prove his Test swansong.

The 101-cap second row has already played his final game for home province Munster, and Corrigan believes O'Connell will be an "even more dangerous animal" at the World Cup owing to his impending Test retirement.

"It is quite amazing; three years ago when he was having the difficulties with his back, struggling with injuries and there were concerns over whether he would even make it back you certainly wouldn't have seen this down the line," Corrigan said.

"You'd have thought at that point that getting another couple of years out of him would have been great, and then he could retire to stud and be happy.

"But that just has changed beyond belief in the last couple of seasons, because I can't remember seeing him playing so well.

"He knows now he will retire from Test rugby after the World Cup, that's clear, and that will absolutely make him more determined to succeed"

"I remember watching him in the South Africa game in the November series, and he came out of the lineout, smashed one of the attackers and changed the attacking impetus of the game in the last play, in the 80th minute I think it was.

"And I found myself asking myself, 'where is he getting this energy from? How is this happening?'

"And at that point I was thinking there's plenty left in him yet, so I can fully understand how Toulon might want someone of his experience for a couple of seasons."

Toulon owner Mourad Boudjellal has amassed a who's who of world rugby on the Cote d'Azur, leading to an unprecedented haul of three-straight European titles.

France's famed disinterest in the strict conditioning regimes favoured in other countries has in part accounted for Boudjellal's desire to sign natural leaders to drive club standards, with Jonny Wilkinson the archetype.

Corrigan believes O'Connell can control the Toulon helm in similar fashion, and backed Ireland's oldest captain of all time to throw everything he has at the upcoming World Cup.

"It's not just about the way he plays the game, it's about what he brings to a squad as well and that's what they are aiming for," said Corrigan, speaking from the Giant's Causeway amid the Rugby World Cup trophy tour.

"He knows now he will retire from Test rugby after the World Cup, that's clear, and that will absolutely make him more determined to succeed.

"He'll be an even more dangerous animal for Ireland, and that's some prospect.

"This is the best opportunity I feel Ireland have ever had in a World Cup.

"I know in 2007 there was a lot of talk about Ireland going over there and going to perform, let's say.

"But I think this is the best-prepared squad of players and I think the best coach possibly we've had so far, in terms of his attention to detail.

"So I think there's no reason in the world why this Irish team can't go over there full of confidence, and I think Paul O'Connell will be leading the charge on that."

Corrigan posed with the Webb Ellis Trophy at the world-famous Giant's Causeway near Portrush in Northern Ireland as Rugby World Cup organisers build excitement towards the September tournament.

Head coach Joe Schmidt's men will line up in Pool D alongside France, Italy, Canada and Romania, but in the meantime the trophy itself is touring the UK and Ireland.

Corrigan believes the trophy itself can prove as big a draw as any world stars themselves; even Ireland talisman O'Connell.

"The trophy is the biggest draw out there," said Corrigan.

"It's bigger than Paul O'Connell, well the trophy's probably about the size of his head!

"It's a great way to inspire youngsters into the sport, allowing them to get up close and personal with the trophy." 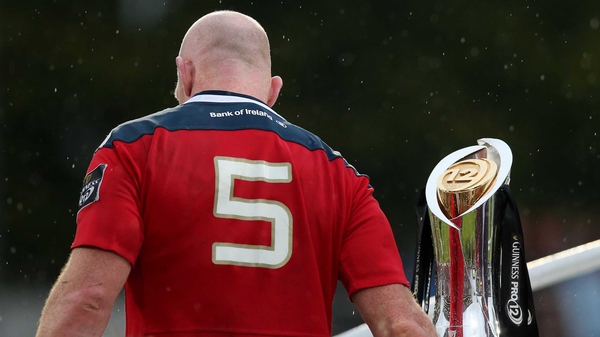