Connacht’s slim hopes of European Champions Cup qualification, and last-ditch efforts to secure a home semi-final by Munster and Ulster will be the major points of interests during Saturday’s six simultaneous Pro12 kick-offs (3pm).

If Connacht manage to remain in seventh, which would be their bes- ever performance in the league, they will go into a play-off requiring them to play Gloucester and a French team - possibly Montpellier - to put them into the Champions Cup draw.

To finish sixth Connacht would need Treviso to beat Scarlets in Italy. That's unlikely but not totally out of the question despite Treviso’s recent poor form. Much of that has been against top sides, and as Leinster found last week Treviso have not run out of enthusiasm for the fight.

But to give themselves the best chance of staying ahead of Edinburgh, Connacht’s focus must be on beating Ospreys at the Sportsground. That is never easy and with the carrot of a home semi-final to motivate their Welsh visitors, Connacht have their work cut out for them.

It's not quite the star-studded line-up of old, but Alun-Wyn Jones, Rhys Webb and Dan Biggar are superior performers in key positions and there is plenty of pace and class in the backline as well.

A massive performance will be required from Connacht and that is something they have struggled to produce in the back half of the season.

Connacht could also do with Leinster doing them a favour by beating Edinburgh and, ideally, denying them a bonus point. For their part winning in Scotland would ensure that Leinster will finish fifth. Would that be enough to quell the dissenting voices calling for change? Probably not.

Leinster’s backline selection is unlikely to have done anything for Pat Lam’s mood. Collie O’Shea partners another AIL graduate in Noel Reid in the centre for his first start of the season to make an all-Clontarf pairing, while Cian Kelleher makes his first start at this level on the wing. In fairness to Leinster, that trio are all excellent prospects and are joined by Zane Kirchner, the Kearney brothers, Ian Madigan and Isaac Boss.

But some star quality has been left out of the squad.

Leinster do have a powerful pack, unchanged from last week's lacklustre display against Treviso. At least the likes of Sean O’Brien and Jamie Heaslip are among those in the Leinster side should have good memories of their last trip to Edinburgh. It is disappointing that a place could not have been found for Shane Jennings, who will not now have the chance to finish his career on the playing field.

The pattern this season has been for Leinster to blow hot and cold and another tight affair may be in prospect.

Ulster appear to have taken a look at the fixtures and decided that the chance to rest their best players after a tough afternoon against Munster a week ago is worth more than going in all guns blazing and trying to maximise their relatively slim chance of a home semi-final.

They make 12 changes to their starting team and even though there are six front-liners in the subs, among them Tommmy Bowe, Iain Henderson, Ruan Pienaar and Rory Best, their chance of getting a win in Glasgow must be considered low.

Perhaps there is method to the madness. If the starting XV can stymie Glasgow’s high-paced attacking game for the first 50 minutes or so, the cavalry might just arrive in time to dictate the crucial closing half hour from off the bench.

But Glasgow are looking too strong to simply roll over and allow that to happen and with Niko Matawalu pulling the strings at nine, Ulster can expect to be run ragged on Glasgow’s home turf from early on. Even those high quality players will struggle to reshape the nature of the match once it has been set.

The lie of the land means Munster are probably entitled to have the highest hopes of leaping into the play-off places. but they are likely to need a favour from either Munster or Connacht.

Like Lam, Anthony Foley would probably have preferred Ulster to put out their best XV from minute one.

That said, unless both Ospreys and Glasgow get bonus points Munster are well placed to get into the top two.

They have been slightly weakened by injuries with Tommy O’Donnell out for the rest season and Simon Zebo, Duncan Casey and Peter O’Mahony missing this week with minor injuries.

But, as has usually been the case this season, Foley is able to select a robust-looking XV with the likes of Conor Murray, Paul O'Connell bringing leadership and quality in key positions.

A bonus point is crucial as if Munster can get on level terms with either Ospreys or Glasgow in the table, the next deciding factor is matches won.

Newport Gwent Dragons are seven points behind Edinburgh and 11 ahead of Cardiff and so have absolutely nothing to play for in terms of league position. Thoughts may already have turned to summer holidays.

All told, Connacht may just come up short, but Munster look like they could just sneak into a top-two position at the death. 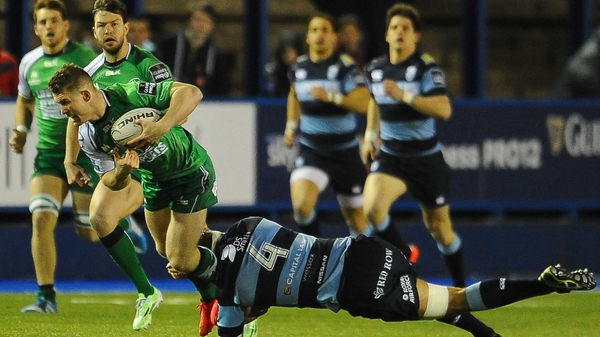