Head coach Anthony Foley hailed Munster’s ability to fight back for a 25-25 Guinness Pro12 draw with the Scarlets, but could not hide his frustration at the mistakes that left them chasing the game.

A JJ Hanrahan try, converted by Ian Keatley with the last kick of the game, earned Munster a draw, but they had trailed Scarlets 25-13 with a little over four minutes to go.

Speaking after the game, Foley had mixed emotions about the game, but said that in their ability to fight back his players had showed promising signs.

“You don’t know whether to laugh or cry, to be honest with you,” Foley said. “I thought at one stage we conceded 10 points far too easily. We’d gone ahead, and worked hard to get ahead, and obviously we had a lot of possession in the game.

“Our use of the ball, particularly around the middle of the pitch, wasn’t great, and we didn’t apply enough pressure. To fall behind so quickly, and to fall nine, to 12 points behind, with the clock running out, was hard to take.

“But in fairness to the boys they dug in, and came up with 12 points there to draw it. Particularly, the score at the end was very pleasing: I thought they managed that situation quite well. Hopefully that’s the signs of growing that’s within the side at the moment.”

Foley said he had known how difficult it would be to get a win at Parc y Scarlets, and tried to look at the positive side of Munster getting themselves out of a difficult situation.

“To come over here and get a draw in the circumstances in which we found ourselves is somewhat pleasurable, I suppose, is the word,” he said. “We just get on now for next week, with the view that, you know, in this block we still haven’t been beaten.”

“To come over here and get a draw in the circumstances in which we found ourselves is somewhat pleasurable, I suppose" - Anthony Foley

Foley spoke about how this group of Munster players are beginning to show the character associated with teams of the past, but said they still needed to eliminate errors.

“I think the boys are showing that [traditional Munster] character. They show they have that strength within each other to play, and once we got tempo and pace on the game we were hard to compete with.

"But it does come down to accuracy: getting blocked down, lucky at times to not concede a couple of intercepts. We need to look at how we manage that middle area of the pitch.”

Next up for Munster are two crunch clashes, against Glasgow Warriors next weekend, then Ospreys the weekend after.

“We’ve a fortnight of hard work, but we’ll look at Glasgow now, and make sure we’re focussed and ready, and see what way the boys turn up tomorrow after a very physical hit-out today.”

Warriors cemented their place at the top of the table with a 19-16 win over Ospreys at Scotstoun on Saturday, and Foley suggested a strong rivalry was developing between the two sides.

“Glasgow and ourselves went toe to toe up there as well, and we ended up losing by three points in a game that possibly, you know, we left behind us.

"Glasgow came over to Thomond Park last year and turned us over, and they also knocked us out in the semi-final last year, so there is a small bit of history developing there between the two sides.” 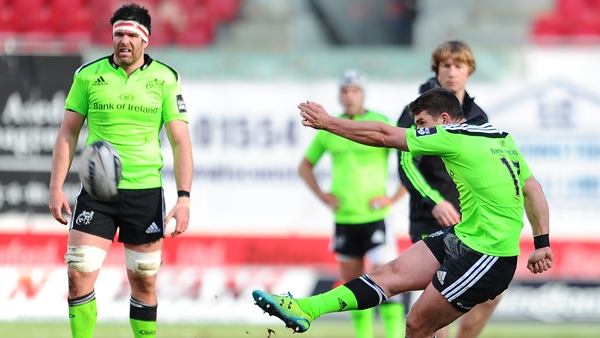