Munster had looked like they might not even get a losing bonus point when they trailed 25-13 with a little over five minutes to go, a try by Jack O'Donoghue, converted by Keatley, and two penalties from the out-half their only scores.

Scarlets, by contrast, had scored a try from Hadleigh Parkes, converted by Steve Shingler, who also added six penalties.

But a 75-minute try from Felix Jones gave Munster hope of a losing bonus point, before Hanrahan's late score, converted by Keatley, earned them a share of the points.

Munster had trailed 25-13 with less than five minutes remaining, but, after George Earle's 74th-minute yellow card reduced the Scarlets to 14 men, they conceded two late tries, with Hanrahan racing under the posts in the final move of the match.

Munster missed a chance to go top of the standings, but remained firmly in contention for a play-off berth. 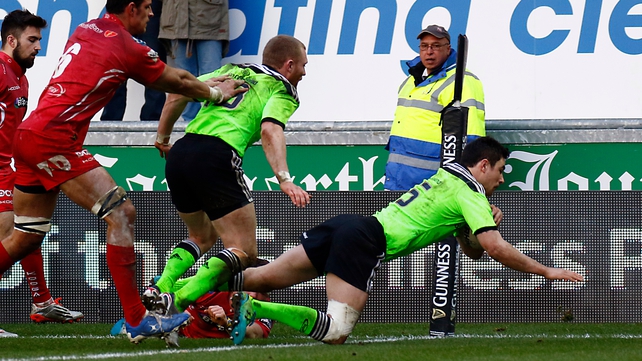 The draw lifted the Scarlets into the all-important sixth spot in the table, but they will feel it was an opportunity squandered.

Both squads had been bolstered by international returnees, with the Scarlets having Wales squad members Rob Evans, Rhys Priestland and Gareth Davies on the bench, while Tommy O'Donnell, Ian Keatley and Felix Jones were back in the ranks for the Irish province.

It was the boot of opposing fly-halves Steve Shingler and Keatley, together with some bruising defence that stood out in the opening 40 minutes.

Both sides looked to give the ball some air, but the tackling was fearsome at times.

A bright start from the Scarlets saw Shingler move them 3-0 ahead early on, only for Keatley to respond for Munster after a strong forward surge.

With Ireland flanker O'Donnell to the fore, Munster enjoyed plenty of possession - 70% in the first half - but were finding the Scarlets defence in determined mood.

After veteran prop Phil John was held up just short, Shingler put the Scarlets back in front, but the tit for tat continued with Keatley on target for the visitors.

A rash high tackle by lock Donncha O'Callaghan on the diminutive Jordan Williams allowed the Scarlets to grab the lead again and Shingler added three more points before half-time after Munster were penalised at the breakdown.

And there was further frustration for the visitors just before half-time when scrum-half Duncan Williams was shown yellow by referee Dudley Phillips for a stamp on the ribs of wing Harry Robinson.

While O'Donnell had earlier left the field following a bang to the head, the Scarlets brought on Evans, Davies and Priestland for the second half, but Munster managed to negotiate the sin-binning without conceding any further points.

And they should have scored themselves, but, after centre Keith Earls broke clear, they butchered a clear overlap out wide.

The Irish province were not to be denied, though, with a period of concerted pressure on the home line leading to replacement Jack O'Donoghue ploughing over from close range.

Keatley's conversion gave Munster the lead for the first time in the match, but it did not last long with Shingler bisecting the uprights from close to halfway.

Moments later it was brother Aaron who was taking centre stage, playing a leading hand in his side's only try.

His charge-down was hacked through by centre Hadleigh Parkes and the Aucklander did well to compose himself, gather and dive over for his first Scarlets try.

Another Shingler penalty pushed the Scarlets 25-13 ahead and put them seemingly in control, but Munster are past masters at pulling a game out of the fire and they did so again.

Firstly, after Scarlets replacement Earle was yellow-carded for not retreating, Munster full-back Felix Jones cut inside to give his side hope.

Then, after the Scarlets were controversially penalised at a line-out inside their own half, the visitors pounced. The forwards drove towards the line and eventually, with the home defence sucked in, Hanrahan was freed for a simple run-in at the posts. Keatley landed the conversion with the final kick of the game. 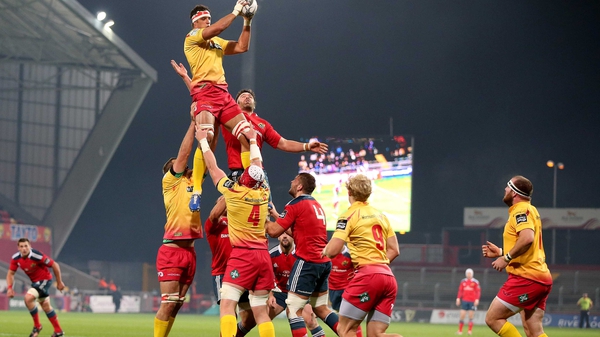