By Tadhg Peavoy in Rome

Going to Rome on the opening weekend was never going to be easy for Ireland and so it proved.

Italy thumped Ireland from the get-go and the game was hugely physical. It’s as clichéd as it gets to say that the Italy clash is the most physical in the Six Nations, but talking to Jordi Murphy in the tunnel afterwards, he admitted that he and the rest of the team felt battered.

An injury update will be issued on Monday, most likely, after everyone has been assessed. Rory Best’s exit after shipping a knock is concerning, as is Sean O’Brien’s hamstring issue. However, given how much of a trench-warfare battle it was, Joe Schmidt will be delighted to have such a clean bill of health returning to Dublin.

And while it will also have pleased Schmidt that Ireland could outmuscle the Italians - especially with the energy-sapping challenges of France and England to come next – surely he must be wondering what might have happened had Ireland been more cavalier with their approach from early on.

Keeping it tight, as they did for the opening half, and much of the third quarter, allowed Italy into the game more than Ireland should have been ready to allow.

When the ball did go outside to the centres and the back-three Ireland were clearly the more dangerous team and Italy were scrambling at times, especially on the right wing, to make cover tackles.

So, the war of attrition that Ireland got involved in was perhaps not the wisest of strategies to take in the Italian capital.

True, Italy packed the areas around the out-half channel with loose forwards, most especially Sergio Parisse and Josh Furno, which put space at a premium in that sector of the park.

But Ian Keatley should possibly have been more aware of the space outside that was there to exploit.

The Munster No 10 looked nervous in the early proceedings, a forward pass and some loose kicks highlighting this. Those nerves prevented him from risking wide moves early in the game and stymied Ireland’s progress.

Of course, he was making his Six Nations debut and one needs to give him that understanding. But overall he did well. His place-kicking was excellent and as the game wore on he grew into himself and can be pleased with a good day’s work at his new office.

Most importantly, he silenced a lot of the critics that said he couldn't step up to Test level and that Ian Madigan should be ahead of him the pecking order.

Right now, Keatley is Johnny Sexton’s understudy, and Madigan and Paddy Jackson – when he returns from injury – will have to win that position back. The irony is, with Sexton believed to be on course to start against France next Saturday, and Schmidt’s keenness to have Madigan to cover 10, 12 and 15 from the bench, Keatley could miss out on the match-day 23 altogether.

The other option available to Schmidt is to include Keatley in place of Madigan on the bench and bring in Luke Fitzgerald as the utility back replacement instead of Felix Jones.

If there was an injury to Kearney, then Jared Payne could switch to 15, with Fitzgerald stepping in at 13, a position which he has looked superb in all season; Fitzgerald would offer a physicality in midfield that could work superbly alongside Robbie Henshaw.

In the Stadio Olimpico on Saturday, when things opened up later in the game, Madigan slotted in at 10, with Henshaw and Tommy Bowe filling the centre slots.

We only got to see that combination at the death, but it’s also one that potentially could be used again in the championship, with Bowe used as a power runner in that position.

When one begins to dissect these options it reveals how many different cards Ireland could potentially play over the course of the championship if injuries intervened, and highlights their strength in depth.

Simon Zebo continued to adapt to Schmidt’s game plan yesterday, by going about the basics of the game as his priority. He also had moments where he showed flashes of the X-factor everyone wants to see from him in a green jersey. He looks like he’s building himself into this team now and he will almost certainly start against Les Bleus at the Aviva.

The back row also delivered enough. Peter O’Mahony is clearly first choice at six, but the stand-ins at seven and eight, Tommy O’Donnell and Jordi Murphy, handled the occasion brilliantly, and were two of Ireland’s most dangerous ball-carriers.

However, by virtue of Sean O’Brien and Jamie Heaslip’s vast amount of experience, it’s hard to look past them for selection next weekend against France - if passed fit. Heaslip will almost certainly be picked, but we’ll have to wait on news of how bad O’Brien’s hamstring problem is. The danger is, of course, rushing him back and aggravating the problem, which could rule him out for the remainder of the championship.

Up front the tight five did a very commendable job and it's hard to see any changes there unless Best fails to recover from the knock he took.

As for Italy, it was all too familiar a story, sadly. A superb performance from the pack for an hour kept them right in the tie. But the backline failed to fire until the final ten minutes when the game had long been put to bed and Ireland were merely attempting to maintain their 23-point winning margin.

When the effort of defending for such long periods finally took its toll on the Italian pack, they wilted and Ireland simply overran them.

The key for them was also at half-back. Neither Edoardo Gori or Kelly Haimona could exert a style or influence on the game that got Italy going until that closing period. Tommaso Allan looked very creative when he came on and Jacques Brunel could well start him at out-half against England at Twickenham.

For Ireland’s sake the hope is that Italy will improve and push teams closer on the scoreboard – if not beat them – as the championship could very well be decided on points difference, and in that sense Italy could have a very real say in the destination of the title. 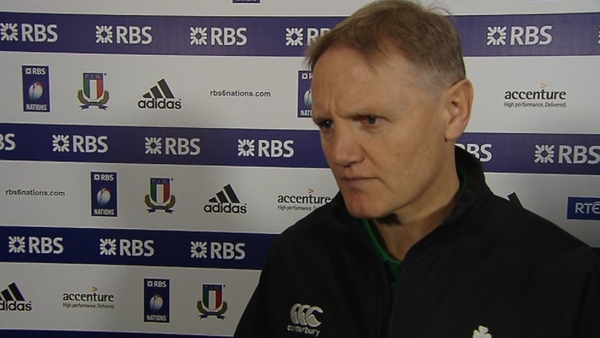