Ireland head coach Joe Schmidt has admitted he was 'very relieved' to leave Rome with a win after his side's opening match in the RBS 6 Nations.

The game was tight for the opening 40 minutes but Ireland managed to establish a six point lead at half-time and stretched clear through second half tries by Conor Murray and Tommy O’Donnell to eventually win 3-26.

Speaking to RTÉ Sport, Schmidt said: “I’m very, very relieved. I honestly think coming here for the first game of the championship, where Italy have been so strong and with a few guys missing, we probably showed a lack of experience out there a few times particularly in that first half."

Ireland had several Six Nations debutants in their ranks. Among them was Ian Keatley, who combined good moments with some nervous kicks from the hand in the early stages.

Schmidt said: “We got charged down and looked disorganised early. When there is that Test match pressure, it is quite tough for players who are playing their first Six Nations game."

Sean O’Brien’s late withdrawal was among the issues that contributed to Ireland’s disjointed opening spell. Schmidt admitted that the call not to play him was marginal and that the flanker felt he could have lined out despite feeling a twinge in his hamstring at the very end of Ireland’s warm-up.

Instead, O'Donnell came in and capped a good performance with that long-range try.

“It probably wasn’t helped by losing Sean just before. His foot slipped out from under him and he just twinged his hamstring. There was a decision to be made and we decided to err on the side of caution. Tommy (O'Donnell) didn’t let us down.

“It is not too bad," Schmidt said of the injury. "He felt he could potentially have played. We felt with him returning from injury that that wasn’t the smartest decision.”

Schmidt admitted that Ireland’s lack of size made it difficult for them to outmuscle the Italians.

"The Italians were never going to give us anything easily. Their speed off the line and intensity at tackle time made it really difficult. Size-wise, we wouldn't be the biggest team and it is difficult to physically dominate teams."

"Size-wise, we wouldn't be the biggest team and it is difficult to physically dominate teams."

Ireland had success in the wider channels in the second half but Schmidt attributed that to good work in the tight rather than a change of policy.

“It was because of what we did in close that we managed to get the points. Our maul went really well and that put the pressure on and they conceded not just penalties but also a yellow card.

"That gave us a numerical advantage that the players played to really well. Tommy O’Donnell went straight up the middle, he showed his pace and got away to score.”

Asked about potential changes for France next week, with Jonathan Sexton, Jamie Heaslip and CIan Healy among those in line to come back, Schmidt kept the focus on reviewing the game just gone.

"I’m looking forward to having a look at the game and making sure we give credit to the guys who went out there and managed to give us a 23 point differential and two points on the table," he said.

"We’re there and now we have just got to  make sure we roll up our sleeves and stay there.”

Ireland will face France, who beat Scotland 12-8 in Paris, in their Round two match on Saturday (1700). 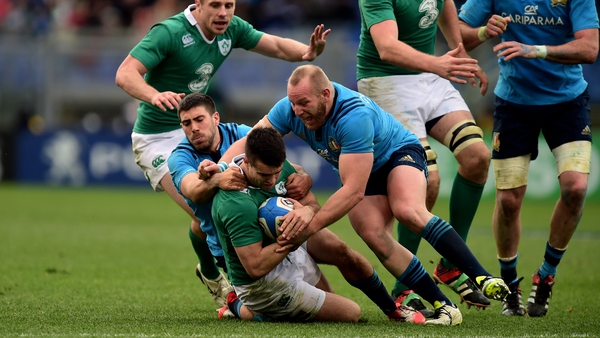 As It Happened: Italy v Ireland