Head coach Matt O’Connor declared himself “pretty happy” with Leinster’s bonus-point win over the Blues and hailed his side’s ability to cope with a passionate and committed Blues side.

Tries from Noel Reid, Jimmy Gopperth, Luke McGrath and Tadhg Furlong helped Leinster to a 22-13 win over Cardiff, who played most of the game with 14 men after Jarrad Hoeata was red-carded for a high tackle on Rob Kearney.

Cardiff’s numbers were reduced further in the second half when Manoa Vosawai was shown a yellow for a knee to Ben Te’o's ribs.

Speaking to RTÉ Sport after the game, O’Connor declared himself “pretty happy with the performance, by and large,” and said, “We did a lot of really good things out there against a really committed side.

“They were pretty passionate and pretty committed, so, even a man down, I thought they stayed in the fight for a long period.”

O’Connor highlighted as positives Leinster’s tackling and defensive display against a Cardiff side that, even after going a man, showed great determination.

“We didn’t concede too many tries,” he said. “They carried the ball at us a lot, and we had to work pretty hard. So from that end, on that surface, I thought it was pretty pleasing.”

O’Connor said the red card for Hoeata was completely justified, saying, “He had a ten-metre wind-up and he’s taken Rob’s head off, so it’s always going to be liable for sanction.”

Leinster’s scoring a try during the ten minutes Vosawai was off was also significant, O’Connor said.

“We needed to get something out of that ten-minute period when they were down to 13, and thankfully we did. Bennie’s got a pretty sore rib, which hopefully isn’t too serious.”

O’Connor said that Fergus McFadden had gotten a bang on his should near the end of the game, but that it should not be too serious.

The result moves Leinster into third place in the Pro12 table, one point ahead of Ospreys, who play the Dragons on Sunday.

O’Connor said he was pleased with the way Leinster were playing, and the return from injury of a number of significant players. 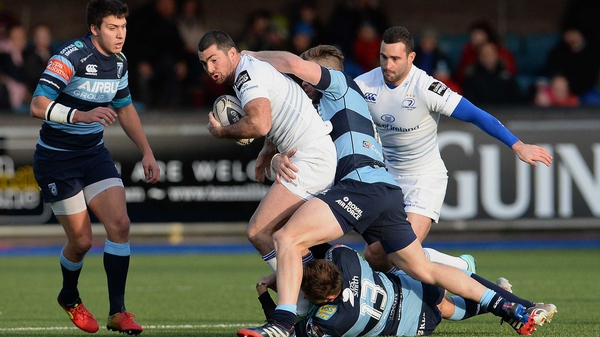