Leinster made Cardiff Blues pay the price for their indiscipline as the Pro12 high-flyers fought back from a half-time deficit to claim a bonus-point 22-13 victory at the Arms Park.

Cardiff, looking for only their fifth win of the competition, were leading 13-5 after 34 minutes when they saw second row Jarrad Hoeata sent off for a neck-high swinging arm tackle on Ireland full-back Rob Kearney.

And the Blues were then reduced to 13 men for a ten-minute spell early in the second half when Manoa Vosawai - their first-half tryscorer - was yellow carded for use of the knee.

It was during that spell that Leinster turned the game in their favour as Jimmy Gopperth and his half-back partner Luke McGrath both scored tries to put the visitors 17-13 ahead.

Leinster then secured a bonus point late on when replacement Tadhg Furlong crossed for their fourth try, as the Irish side scored 17 unanswered points in the second period to keep the pressure up on Pro12 leaders Glasgow and Munster.


It had been something of a tortuous trip to Wales for Leinster.

They made two failed attempts to land at Cardiff Airport on Friday night, but had to divert to Bristol Airport because of the extreme wind and eventually arrived at their hotel about three hours behind schedule.

They also arrived somewhat depleted with a host of international big names absent through injury, suspension or being rested.

However, Leinster did not appear to be overly affected by those issues, as they took the lead in the Welsh capital after just 61 seconds.

After the ball was turned over following a Josh Navidi charge, fly-half Gopperth spotted a gap around the fringes and raced up the field. He then switched with Noel Reid, presenting the centre with a clear run in to the line.

There was a further setback for the Blues when Wales and Lions skipper Sam Warburton was forced off early with a nasty looking cut to his eye that was to end his day's work.

As it turned out, his back row replacement Vosawai was to have a big impact on proceedings in more ways than one.

After fly-half Gareth Anscombe had made good use of the strong wind at his back to put the Blues in front with two well-struck penalties, the home side's mounting pressure was rewarded with a try to Fijian-born Italy international Vosawai just before the half-hour mark.

Vosawai was the man who started and finished it, turning over the ball to win possession in the opposition 22 and then reaching the line following a succession of close-range drives from the forwards, with the score awarded after lengthy consultation with the video referee.

The Blues had worked themselves into a well deserved eight-point lead with some strong cohesive play, but then on 34 minutes came the game's decisive moment.

As Kearney ran full pelt out of his 22, he was felled by a swinging arm to the neck from former All Black lock Hoeata.

It was a reckless and dangerous tackle and after further lengthy debate with his fellow officials, referee Neil Paterson brandished a red card.

Suddenly the whole complexion of the game changed. The Blues managed to hold on to half-time with their 13-5 lead, but they faced a battle to keep hold of that in the second half being down to 14 men and playing into the wind.

The challenge became even greater on 48 minutes when Vosawai was sin-binned and despite a stirring effort from the reduced hosts, tries from Gopperth and scrum-half McGrath put Leinster in front, with Furlong's late touchdown sealing the spoils and the bonus point. 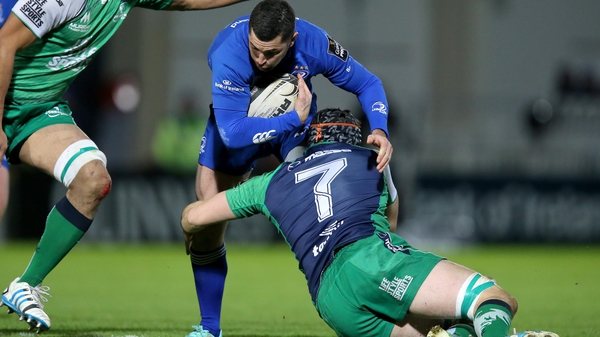 Leinster look to back up victory over Ulster