Terenure College's mid-season slump continued at Lakelands Park today as they were outgunned 33-24 by UCD in an eight-try Ulster Bank League thriller.

The Bobby Byrne-coached students should have won that match and were clearly determined not to blow a second winning position when holding a 23-17 interval lead at Lakelands.

The difference this time was the composure shown by young half-backs Ross Byrne and Nick McCarthy and an athletic pack that included the Leinster-capped trio of James Tracy, Jordan Coghlan and Josh van der Flier.

This round 10 clash started at breakneck speed with Harry Moore and Peadar Timmins swapping tries inside three minutes before Mark O'Neill's 11th-minute penalty put Terenure 10-8 to the good.

But successive sin-binnings for flanker Robert Duke (24 minutes) and scrum half Kevin O'Neill (27) knocked the home side off their stride, allowing UCD to dictate much of the play in the second quarter.

The students took full advantage with three unconverted tries in a nine-minute spell approaching half-time - the in-form Sam Coghlan Murray and Shane Grannell (2) both touching down to secure a bonus point by the interval.

'Nure hung in there, though. Mark O'Neill converted a late penalty try to close the gap to six points at the break and give James Blaney's men a timely boost.

UCD wrestled back control in the crucial third quarter as out-half Byrne landed the first of two penalty attempts and Coghlan came off the bench to score try number five for the visitors, with 23 minutes remaining.

Terenure lock Fergal Walsh dotted down in the 76th minute, with Mark O'Neill converting, to reduce the arrears to nine points but UCD were not to be denied a well-merited away win.

With Terenure slipping up, Lansdowne are the new leaders of Division 1A after coming from behind to beat St. Mary's College 16-10 on the Aviva Stadium's back pitch.

Mike Ruddock's charges, who trailed 10-3 at half-time, knuckled down in the second half as tries from winger John Coleman and replacement prop Peter Dooley saw them claim their fifth league triumph on the trot.

Meanwhile, a late surge saw defending champions Clontarf get back to winning ways with a 24-21 victory over hosts Old Belvedere at Anglesea Road.

A try from Leinster winger Mick McGrath, coupled with a Matt D'Arcy effort five minutes from time, made the difference for the north Dubliners who had lost four of their previous five league games.

'Tarf looked closer to their 2013/14 vintage with the returning McGrath and Max McFarland featuring in the back-three alongside McGrath's brother Rob. McFarland made a slashing 50-metre break to set up centre D'Arcy for the opening try inside five minutes.

David Joyce converted before Old Belvedere had a couple of near misses, including two off-target penalties from Leinster's Steve Crosbie, and although 'Tarf failed to capitalise on a D'Arcy-led attack, Joyce nailed a penalty on the half hour to make it 10-0.

'Belvo exerted plenty of pressure on the resumption, with Daniel Riordan twice kicking penalties to touch, and both Kieran O'Gorman and Riordan went close to scoring tries from close range.

Finally, Old Belvedere's efforts paid off when their excellent scrum drove 'Tarf backwards to their try-line and captain Jonathan Slattery pounced for a 51st minute try which Crosbie converted.

Paul Cunningham's side hit the front just ten minutes later when the ball was spread wide on the left and a kick through was gathered by Ireland Under-20 centre Peter Robb for a second converted try.

Clontarf roared back with a strong run from centre Michael Brown. Then, from an attacking scrum, they moved the ball at pace to both wings and on the right, Mick McGrath swerved inside the 'Belvo cover for a well-taken seven-pointer and a 17-14 lead.

This exciting, fast-paced encounter took another twist when 'Belvo used their lineout platform to press for try number three and it arrived when replacement scrum half Charlie Rock moved the ball wide and full-back Riordan, faced with a two-on-one opportunity, scored with a neat step inside. Crosbie split the posts again for a 21-17 scoreline.

However, that good work was undone when the 'Belvo defence opened up for the impressive D'Arcy to charge in by the posts for his fifth try of the league campaign. Joyce added the extras to give the visitors a three-point advantage.

There was yet more drama when 'Tarf flanker Adrian D'Arcy was sin-binned for infringing close to his own posts. 'Belvo went for broke in search of a bonus point match-winning try, opting for a five-metre scrum. But their front row was penalised and 'Tarf prevailed by a narrow margin.

Ballynahinch, the newly-crowned Ulster Senior Cup champions, continued their very good winter form by scoring 27 unanswered points in the second half of their 30-6 home defeat of Young Munster.

Munsters held a 6-3 half-time lead at Ballymacarn Park thanks to two Gearoid Lyons' penalties, however 'Hinch went up through the gears with three tries over the closing 25 minutes. 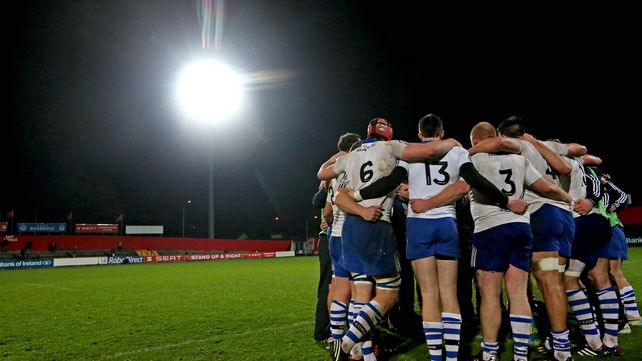 On Friday, Cork Constitution pulled clear of local rivals Dolphin in the second half to win 17-6 in the derby at Temple Hill.

Tom Tierney's men took the losing bonus point away from their visitors thanks to two injury-time penalties from Tomas Quinlan.

Quinlan, one of Constitution's star performers from last year's All-Ireland Under-20 winning side, converted four penalties for a 12-point haul and dovetailed well with captain Gerry Hurley at half-back.

Injuries and provincial call-ups have hampered Dolphin's hopes of registering their first league win in recent weeks, and that bad run of luck continued when back rower Ryan Murphy was forced off in the first half with a suspected broken arm.

A Rory Scannell penalty cancelled out an earlier Quinlan effort by the end of the opening quarter, with the game just as tight as the sides' November encounter at Irish Independent Park when finished in a 6-6 draw.

Quinlan put a penalty wide before a successful strike close to half-time gave the home side a 6-3 buffer to take into the second period.

Scannell missed the target with an early penalty before the Constitution pack had to soak up further pressure. A return visit to the 22 yielded a 52nd minute which Scannell converted to bring his side level.

However, Con's forwards gained the upper hand to present replacement hooker Max Abbott with the opportunity to touch down out wide. Incredibly, it was the only try scored by either side in their last three league meetings.

The conversion was off target at 11-6 and Dolphin missed a gilt-edged opportunity to respond, an overthrown lineout five metres out ruining a hugely promising position with Con winger Darren Sweetnam - himself a former Dolphin player - in the sin-bin.

That seemed to knock the stuffing out of Dolphin's challenge and those two late penalties from Quinlan wrapped up the home win, as Con collected the inaugural Kearys Cup  - presented by the Cork car dealers who sponsor both clubs.

Meanwhile, Garryowen, who play Cork Con in next week's Munster Senior Cup final, claimed a 34-17 bonus point victory over Shannon in the Division 1B derby clash at Thomond Park.

Out-half Jamie Gavin had a very good night with the boot, scoring 19 points via a try, four conversions and two penalties as he took his haul for the league campaign to 92.

Having scored three tries in the first half, at the end of which they led 24-5, the Light Blues had to wait until the final minutes to secure their bonus point from a penalty try.

The visitors made the perfect start when Gavin landed a penalty and winger James Frawley raced in for a try which Gavin converted for a 10-0 lead in as many minutes.

Munster's Paddy Butler touched down in the corner from a traditional Shannon-style maul, but that was as good as it got for Ian Sherwin's side as Garryowen soon took complete control.

Impressive half-backs Neil Cronin and Gavin helped themselves to a try apiece as Shannon fell 19 points adrift, and Gavin stuck over another penalty five minutes into the second period.

Shannon, who lost 21-3 to Garryowen in the opening round, briefly threatened a comeback when full-back David O'Donovan finished well for an unconverted effort. However, the penalty try ensured a five-point return for the visitors, with Shannon captain John Shine responding late on with his fourth try of the league season.

Dublin University showed that they are genuine promotion contenders by stunning league leaders Galwegians into submission at College Park this afternoon.

Trinity produced their best performance of the season to date, running in five tries in a 35-5 demolition job of Matt Brown's table toppers who leaked 22 unanswered points in the second half.

It was a bad day at the office for 'Wegians who were well off the pace, allowing the students to dictate as they extended their winning streak in the division to seven matches - six wins and a draw.

The result cuts 'Wegians' lead at the summit to five points, while fourth-placed Trinity are now only nine points off top spot ahead of the Christmas break.

Second-placed Ballymena should be closer to the league leaders but they were held to a 13-13 draw by Corinthians in Galway today.

It was very much a game of two halves at Corinthian Park where Andy Graham's Braidmen opened up a 13-0 lead thanks to tries from lock Connor Smyth and winger Jordan Foster.

But Corinthians mounted a spirited comeback after the break with centre David Panter crossing for a try and out-half Conor Murphy kicking eight points, earning a share of the spoils for Pat Cunningham's sixth-placed team.

Bottom side Belfast Harlequins revived their fortunes with a runaway 38-7 victory over UL Bohemians at Deramore Park, with Ulster duo Michael Heaney and Rory Scholes both touching down.

'Quins put an end to their four-match losing streak, scoring five tries in all as they paid a fitting tribute to former player Fintan Hillyard who sadly passed away last Tuesday following a brave battle with cancer.

A minute's silence was held in Hillyard's honour, and Adam Larkin's men burst out of the traps to produce a dominant first half display. They scored three tries by the interval to lead 26-7, and Heaney and Scholes joined captain Danny Annett and two-try winger David McMaster in crossing the whitewash.

Scrum half Heaney finished with a 16-point haul, kicking three penalties and a conversion, as 'Quins closed within two points of Shannon (ninth) and Malone (eighth) at the foot of the table.

In the evening kick-off at Dubarry Park, Buccaneers swept Malone aside for a 32-14 bonus point win which keeps them in touch with the top four.

Connacht flanker Mata Fifita, who recently returned from a heel injury, scored one of Buccs' four tries with his back row colleague Kolo Kiripati bagging a brace and out-half Callum Boland also touching down.

Boland had a rewarding night with the boot, landing three conversions and two penalties to complete a handsome 17-point tally. 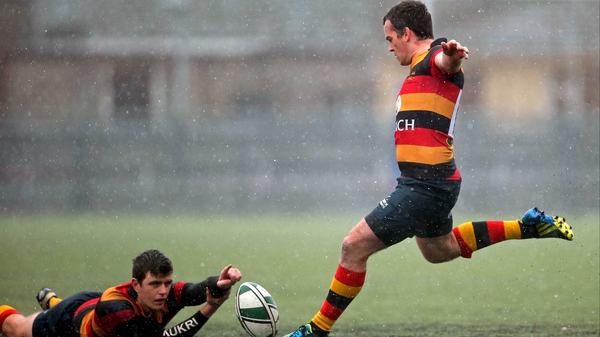