Six-try Ireland have dismantled an organised but limited Georgia side to record a 49-7 victory in their international Test clash at Aviva Stadium.

The visiting Lelos proved hugely physical and difficult opponents in the opening 40 as Ireland limped to a 9-0 advantage through three Ian Madigan penalties, with errors ruining some free-flowing rugby from Joe Schmidt’s team.

Madigan added five conversions in an assured display from boot and hand, while Georgia could only muster a single try and conversion from Giorgi Nemsadze and Merab Kvirikashvili respectively.

In truth in was adequate rather than spectacular, but job done by the home side.

The Lelos dominated the early doors exchanges, camping in the Ireland half, and spreading to the centres, as the home team stood firm against what was essentially a rather flat back line from Georgia.

That early dominance was rewarded as Mike Ross collapsed a scrum under pressure from Mikheil Nariashvili; however, fullback Kvirikashvili pulled the effort on goal to the right from the ’22.

After that opening salvo Ireland settled, with Jones carrying hard up the middle, followed by Madigan pinging Ireland to the corner. It came to nought as Georgia cleared their lines following a scrambled lineout, but it gave an indicator of Ireland’s dominance to come.

From the next phase, Kote Mikautadze handled the ball on the deck and Madigan slotted the three points from just inside the 10 to give Ireland the lead.

They continued to dominate possession and ground as prop Kilcoyne made a scintillating break from halfway, turning on the jets to reach the ’22 where Kvirikashvili brought the Munster man down with a choke tackle.

Ireland went another number of phases before Georgia killed the ball on the deck and Madigan doubled the lead.

Minutes later, Milton Haig’s eastern European side were again penalised on the deck. This time, though, the Ireland outhalf got his angles wrong on the place kick from the 10m line and his effort dropped to the left of the sticks.

Schmidt’s team should have gone over for a first five-pointer after 25 minutes, but Zebo, with a one-man overlap outside him, opted to go alone and was pinged for holding on to the egg on the deck. 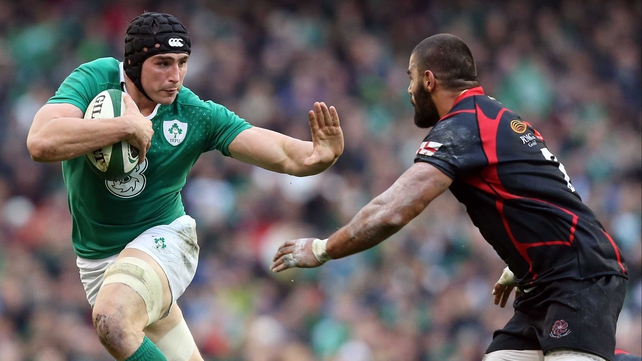 Ireland kept coming in waves as the game ticked towards the half-hour mark, but Georgia stood firm as Madigan attempted to release the outside backs.

Around the 30-minute mark there was also an incident of foul play as Dominic Ryan’s eye was met by a Georgian boot at a ruck. Captain Eoin Reddan raised the issue with referee JP Doyle. A citing seems likely.

Ireland continued to press as the game ticked towards the interval, Zebo’s jinking to win a penalty, which Madigan popped into the corner.

They went route one from the lineout and attempted to maul their way over the whitewash, but were repelled with ferocious chop and choke tackle combinations.

A further penalty was awarded and Ireland again went the route of the lineout maul before Tommy O’Donnell peeled off the side and went solo for the line. He was brought down inches out, and in stretching to get to the score, lost control of the ball.

Madigan added a third penalty on the stroke of the break, to make it 9-0, as Georgia were again caught on the wrong side of the law with Giorgi Begadze sin binned for failing to release on the deck.

In truth, the first 40 was a disappointing showing from Ireland, who looked disjointed and slightly flat with ball in hand.

Just as against South Africa last week, Ireland started the second half in storming fashion, winning a lineout and mauling at the ’22, before Reddan released Kilcoyne off the side at the breakdown, and the prop broke two tackles to touch down for Ireland’s opening try. Madigan added the extras.

And it was the maul that reaped dividends again on 51 minutes as Robbie Diack caught the lineout at the tail on the five and the Ireland eight shunted their way to the line, where Strauss peeled off and touched down. Madigan added the conversion from wide right to push Ireland out to 23-0.

Georgia finally got off the mark themselves just before the hour, some slack defending from Ireland allowed Nemsadze to go over. Georgia worked space off a ruck as they drew in the Irish cover and the second row, standing in the pocket, brushed aside Reddan to steam over from the ’22. Kvirikashvili added the extra two from straight in front of the sticks.

However, the revival was short lived as Number 8 Dimitri Basilaia saw yellow for playing the ball with his feet in the ruck.

Ireland immediately capitalised. Choosing to scrummage, they used wing Craig Gilroy as an extra runner up the middle, before spreading out the line where Zebo was left with acres of space to canter across for another Ireland try. Madigan had no issues slotting the kick from wide left on the ’22.

On 62 minutes, Ireland had brought on seven of their eight replacements, and the impetus of those fresh legs came good within five minutes as they sucked in the Georgian defence, before Olding released Jones on the right flank for the fullback to touch down.

Eoin Reddan on the win over Georgia

Madigan missed the extras this time, as his kick from the right tramlines was pushed to the left by a narrow margin.

The move of the game came soon after as Ireland cut the opposition apart.

Winning loose ball in his own '22, replacement No 9 Kieran Marmion burned the Georgia backline to surge into their half, before popping wide to fellow replacement Ian Keatley, who fed out to Sean Cronin, the replacement hooker releasing Jones on his inside shoulder to break the line and a scrambling Georgian tackle to go over for his second try. Madigan again converted.

It was one-way traffic at this stage, as Keatley - playing at first centre - released Olding from fullback to break the line and sprint home for yet another Ireland score. Madigan added another two points from the easiest of positions.

Georgia made their way up to the Ireland ’22 in the final minute looking for a consolation score, but ultimately it came to nothing as they failed to exert enough pressure in the pack, or skill out wide, to damage the green defence, leaving Ireland with a handicap-exceeding 42-point winning margin.

Attentions now turn to a far sterner challenge, the visit of Australia to Dublin next Saturday. 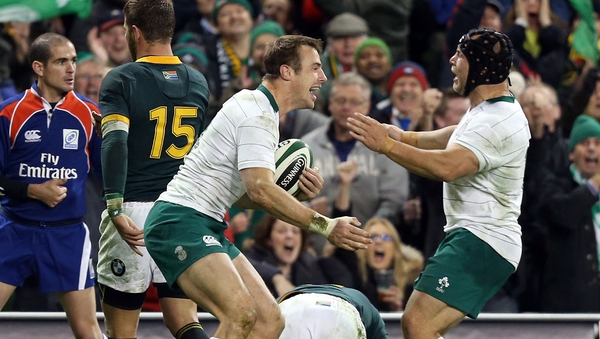