Joe Schmidt’s Ireland recorded a shock 29-15 victory over South Africa at the Aviva Stadium, with an awesome display against the world’s No 2 ranked team.

Ireland led 6-3 at the interval through two Johnny Sexton penalties and the much-fancied Springboks could only muster a single penalty from Sexton’s opposite number Handré Pollard.

And things only got better for Ireland in the second 40 as a close-range try from Rhys Ruddock and a Sexton conversion put Ireland 13-3 ahead.

The Boks fought back with a try from flanker Marcell Coetzee and a Pollard conversion. But the game swung when replacement hooker Adrian Strauss was sin-binned. Ireland powered home with a Tommy Bowe try, allied to kicked points from Sexton and Ian Madigan, to stun the rugby world and the bookmakers alike.

The early exchanges in Dublin 4 proved even with Ireland dominating possession and using repeated forward drives to batter the midfield, but it reaped little joy as the Boks held firm.

The major early talking point came from a Duane Vermuelen hand-off with a high elbow to Jamie Heaslip’s neck in the fifth minute, which referee Romain Poite left un-penalised by a sin-binning despite several views of the incident on the stadium’s big screen. 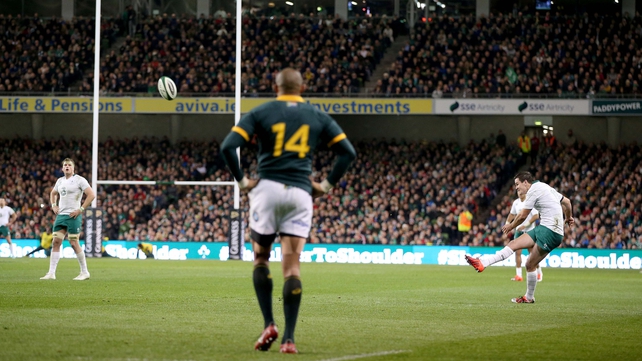 First blood came for Ireland when the Boks scrum collapsed through tighthead Jannie du Plessis, and Sexton lashed over the resulting penalty from just outside the 22; deserved reward for dominating the opening 10 minutes.

The Boks first threat came soon after, but a loose pass from No 13 Jan Serfontein to Cornal Hendricks on the right wing ended the move with little fanfare.

Eben Etzebeth’s lineout steal on 13 minutes, deep in the Ireland 22, created huge danger. After repeated phases, Robbie Henshaw put Bryan Habana on his back as the best tackler in the world, the touchline, was called into play.

A second wave of attack came from the Boks, yet the Ireland defence repelled it with fierce power in the ruck before Sexton flyhacked long to touch.

South Africa could have levelled the tie just after the quarter hour mark, with Ireland’s pack killing the ball at the ruck; however, Pollard’s kick dropped wide left from a tee mark just inside halfway.

The Boks continued to dominate possession but a Serfontein knock on in the 22 highlighted their inability to breach a rock solid Ireland defence. And despite the southern side’s purple patch, it was Ireland that got the second score. Pollard failed to roll away from a Sexton tackle, with the Irish out-half popping over from the 22 for 6-0. 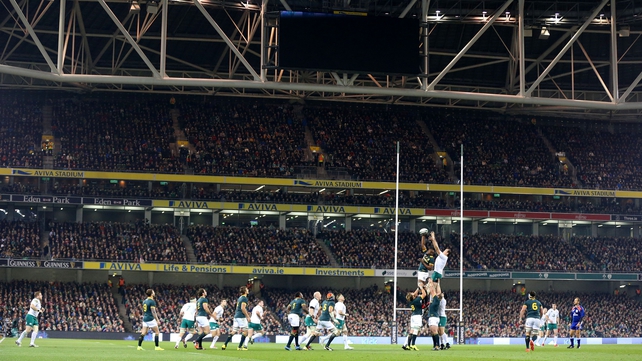 The visiting pack continued to batter Ireland fringe defence, using maul and tight drive combinations. The Boks scrum was worryingly dominant at this point, with the Irish eight collapsing twice - both times Pollard booted to the corner, with no points resulting for the away side.

As the clock ticked toward half-time Ireland remained under the kosh possession-wise, but relieved well as Heyneke Meyer’s team failed to capitalise on either field possession or a long-range penalty.

Finally the score that seemed inevitable came, as referee Poite wrongly judged Paul O’Connell to have illegally handled in the side of the ruck. Pollard slotted an easy three pointer to halve the deficit before the interval.

It was all Ireland immediately after the half-time oranges and Sexton pinged to the corner where Willie le Roux cleared to touch under ferocious pressure.

From the ensuing lineout Ireland took at two with Devin Toner, before splitting a soft centre, which saw Ruddock crash through for an All Black-esque try from inside the 5.

Sexton’s conversion was sublime from wide left, as Ireland put a ten-point lead down and demanded a response from their illustrious opponents.

And they did come at Ireland in their usual fire and brimstone fashion, banging up midfield with deep lines. But the final pass was missing with knock-ons from Hendricks and Schalk Burger as Meyer’s side needlessly threw wild passes on early phases. Scrum-half Francois Hougaard’s passing was also frequently low each time he released from the base of the ruck. He was replaced soon after for the fresh legs of Cobus Reinach.

Incredibly, when the Boks won a fifth kickable penalty, Pollard once again kicked for the corner. Only this time from a Matfield catch at four, Coetzee powered over from the maul. Pollard narrowed the gap to three with the spot kick.

The intense Top 14 schedule also began to take its toll then as Sexton pulled up with cramp on the hour mark, something that will no doubt worry the Ireland medical team.

However, there appeared to be no hint of restriction and he pushed his side out to 16-10 with a wide penalty after the Boks had again infringed at the breakdown.

As the visitors came again with grunt rather than guile up the middle, Ireland’s high line in defence forced another knock on as the crowd’s voice swelled in confidence.

And then, on 67 minutes, the momentum swung massively in Ireland’s favour. Replacement hooker Adrian Strauss saw yellow for taking Ireland full-back Rob Kearney out in the air and Ireland sensed blood.

They pounded the South Africans back into their own 22 and forced the Boks to kill the ball in the ruck to prevent Ireland going over for five and the Aviva Stadium crowd roared their approval.

Sexton, after 15 seconds of thought, decided to go for goal and nailed the kick from just inside the 22. A nine-point lead, with ten on the clock, and a Bok in the bin; it was Ireland’s to lose.

They rammed home their advantage and battered their way to the 22 before Conor Murray kicked crossfield for Tommy Bowe to race onto the bouncing ball and touch down in the right corner.

Sexton - flawless for 74 minutes - slammed over the conversion before being replaced by Madigan.

As disgruntled away fans began to trickle from the stadium, Ireland won another penalty at the breakdown and the Boks displayed an inability to win clean ball or spread wide early.

Instead, the home side continued to edge their way upfield and frustrate the Boks with superb retention at the breakdown. They won a further penalty, which Madigan calmly slotted.

The Springboks got a consolation in the final minute as the Ireland defence was sucked in and JP Pietersen was left to canter home in open country out wide right.

That was to be the last score. Poite blew his whistle to call time on one of Ireland’s greatest ever victories in Test rugby, and just four points shy of their biggest ever winning margin over South Africa. 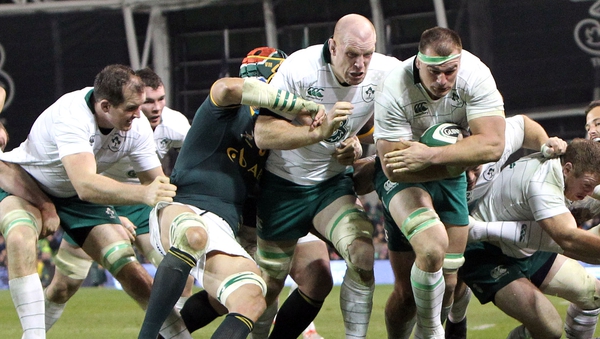