Head coach Joe Schmidt has said Ireland’s Test against Georgia on Sunday is “one of the only real opportunities” for players to press their case for inclusion in next year’s World Cup squad.

Schmidt rang the changes from the side that started against South Africa last weekend, making 13 switches to the starting XV.

Speaking to RTÉ Sport, Schmidt said the selection had been a difficult one as Ireland sought to balance keeping continuity following last weekend’s win with the need to give players a rest after what was a bruising encounter with the Springboks.

“There were a lot of tired and sore bodies, and in the end, with the six-day turnaround to Australia we just felt that it would be pertinent to try to freshen a number of players.”

He also highlighted the limited window of opportunity for players to show that they had what it takes to step up and stake their claim for a starting spot.

“I think the other aspect of it is that post-Australia we have five massive games in the Six Nations, which are always incredibly competitive, and we’ve got to go as hard as we can in that period, and then suddenly you’re in the lead-up to a World Cup.

“So this was one of the only real opportunities in front of a home crowd ... [where] players will have an opportunity to put their hand up and put themselves in the mix.”

Schmidt identified Ireland’s set pieces as areas that needed to improve following the win over the Boks but said he had been happy with Ireland’s defensive showing.

“We didn’t quite get the scrum and lineout platform that we were looking for,” he said. “Defensively, we were relatively happy, but then we let in a try at the end of the game that really we should have done better with. And we want to be a truly 80-minute team.”

Speaking about the two debutants in Ireland’s starting XV to face Georgia, Dave Foley and Dominic Ryan, Schmidt said Foley had earned his place as a starter for Munster and had stepped up in the absence of Donnacha Ryan.

“And I think he puts himself about physically. He certainly doesn’t take a step back.”

Schmidt said he expected Georgia to be well organised and conditioned, and highlighted their Top14 players as posing serious challenges.

Schmidt suggested the captaincy was an honour Eoin Reddan well deserved, and hailed a player he called a “leader in the way he goes about his business, preparing himself; and other players look to him.

“Even if he’s not the most outspoken, he is certainly one of the guys who is always prepared, he always knows what’s expected of him, and then trains specifically to try to deliver exactly what we need from him.

“That’s the sort of example we need. His experience in that hub of nine... will help bridge a little bit of inexperience in the front and the back together, and that’s another reason it’s very comforting to have Gordon D’Arcy there.” 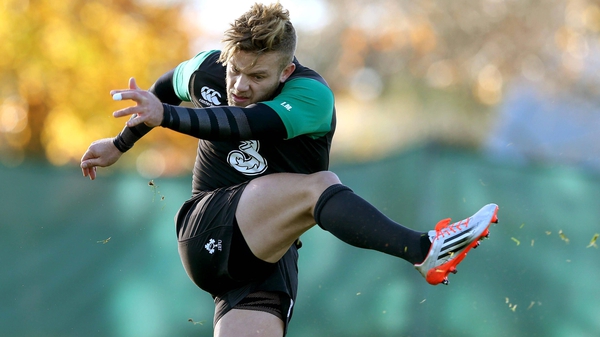