Popular Australian winger Nick 'Honey Badger' Cummins is still hoping for a shot at playing in the World Cup next year after scoring a try against the Wallabies for the Barbarians at the weekend.

The rangy 27-year-old, who has cult status back home for his creative use of Australian slang and shaggy blond hair, left Australia for Japanese club Coca Cola West Red Sparks at the end of the last Super Rugby season.

Released early from his contract at the Western Force on "compassionate grounds" so he could make more money for his family, his departure put an end to his international career after 15 Tests.

Scoring a try -- or 'bagging a meat pie' in his own parlance -- during a fine performance in the Barbarians' 40-36 loss to Australia at Twickenham on Saturday clearly whetted his appetite for more top class rugby, however.

Under Australian Rugby Union (ARU) rules, Cummins would have to play in Super Rugby next season to feature for the Wallabies at the World Cup in England and he is hoping a deal might be struck with his Japanese club for a temporary release.

"Just have a yarn to the Japanese and get me on the burst, I'm in," Cummins told the Sydney Morning Herald in London.

"There was one point in the lineout where it was (Australia's) ball and I moved forward, I was looking at the jersey.

"That sort of feeling holds pretty deep with you and I would have loved to be back in the mix there. You can't change what's going to happen, I've signed for two years with the Japanese club and I'm a man of my word, I'll go through with that.

"But if there's a chance we can work something out, I'll be stoked."

Cummins made the decision to sign a lucrative deal with the Japanese club after his father -- who was named Queensland's Father of the Year in 2012 for raising eight children, two with cystic fibrosis -- was diagnosed with prostate cancer. 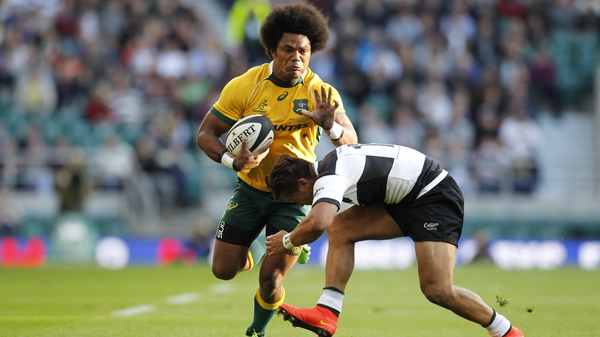 Wallabies made to work by Barbarians