Australia launched the Michael Cheika era with a victory, but failed to convince in edging past the Barbarians 40-36 at Twickenham.

The Barbarians cut Australia's 18-point lead down to just four points late in the second half, but were unable to snatch victory at the death.

New coach Cheika kept his autumn Test series cards - Australia face Ireland in Dublin on 22 November - close to his chest by making 10 changes from the Wallabies side that pushed New Zealand to the brink in 29-28 Bledisloe Cup defeat last month.

The former Leinster coach's first Australia challenge still ended in victory however, as the Wallabies won out six tries to five in their bid to move past Ewen McKenzie's acrimonious resignation.

The Wallabies had Will Genia and Quade Cooper back in half-back tandem for the first time in a year, but still failed for fluency.

Frank Halai, Adam Thomson, Francis Saili, Nick Cummins and Marnitz Boshoff claimed the scores for the Barbarians, John Kirwan's side unlucky not to prevail in the event. 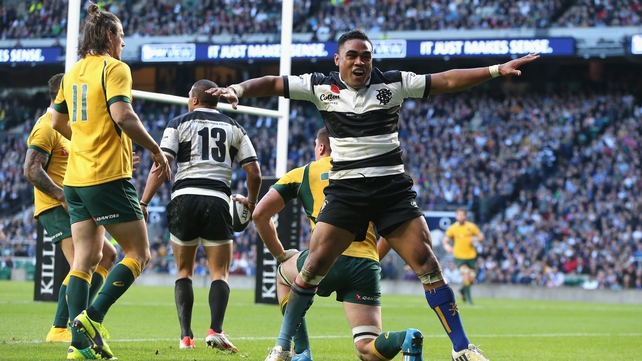 The Barbarians threw out all their trademark trick plays in the first 10 minutes - but were unable to make any count.

The Japan-based flyer knocked on though, killing cheeky move number one.

When Slade punted a penalty to the corner rather than for goal, in the ultimate touring-side spirit, the BaaBaas then pumped 11 men into the five-metre lineout.

Australia conceded a penalty rather than a try from the drive, teeing up the Barbarians for another sneaky ploy.

Tomas Cubelli tapped the five-metre penalty then chipped the ball back over his head, again catching the Australians napping.

Slade rose highest in the in-goal area, only to knock the ball on off his shoulder.

Just when Australia looked to wrestle the initiative though, Slade kick-started a fine scoring move with an inch-perfect jink and offload out of the tackle to Cummins. 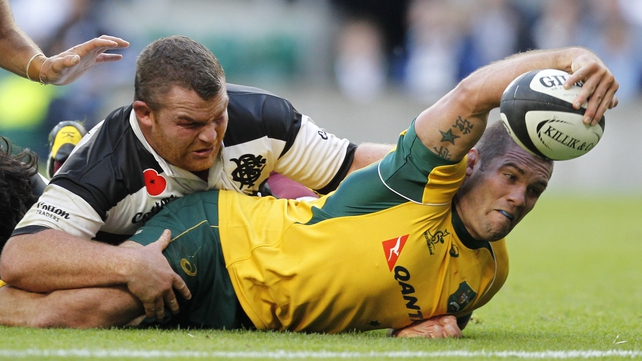 The industrious Stephens clawed a pass off his toes in midfield to keep the move alive, before the ball was whipped wide to Halai.

The Auckland Blues wing scythed in at the perfect moment to open the scoring.

Francis Saili's defence-turning grubber sent Halai racing through again, only for the wing to fly-hack on when he should have scooped up.

Cooper sustained Australia's curiously indifferent start by botching a four-man overlap with a needless miss-pass, only for lock Carter to punch over for a try on the next phase.

The stubborn Barbarians refused to give in, Saili twice involved in sending Thomson home for the hosts' second score.

Slade's conversion handed the BaaBaas the 12-7 advantage, only for Robinson to plough home on a tight drive.

Cooper's conversion scrambled Australia a 14-12 lead that Cheika's side retained until the break.

The hosts hit back immediately though, Saili chipping the Wallabies defence before beating Sean McMahon to the loose ball to dot down.

Slade then slotted a 45-metre penalty to edge the BaaBaas into a 22-21 lead.

Wallabies boss Cheika made a raft of changes on 55 minutes; both Cooper and Genia were hauled off.

And the immediate dividend was Horne's try, the wing profiting as the Barbarians ran out of blindside defenders.

Israel Folau blasted clear following a Barbarians break, only for Halai to haul him down and steal the ball.

The Blues wing was hustled into touch though, and the Wallabies' replacement fly-half Foley nipped in from the quick lineout.

Foley converted his own try to hand Australia an 11-point lead, before McMahon ghosted home cheaply too.

Australia wing Cummins then picked a smart line to race onto Tim Nanai-Williams' blind pass to bag a Barbarians try against his international team-mates.

Replacement Boshoff powered away for a score to cut the Wallabies' lead to just four points with a minute to play, but Kirwan's men were unable to turn the tide at the death. 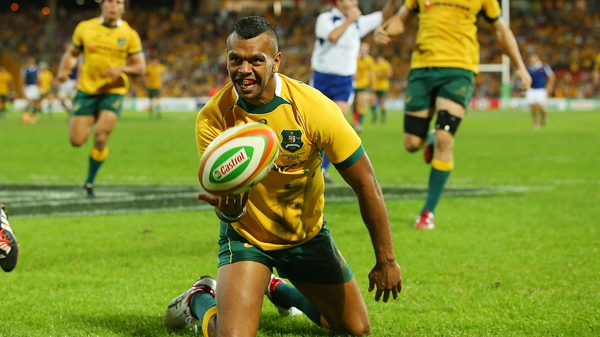 Beale fined, but not suspended, for in-flight row